Welcome to my first OWLS post for 2020! I couldn’t think of a more perfect topic to kick off my return to OWLS than with the subject of Devotion.

Devotion is a very interesting concept. The meaning behind this word can change with everyone to various degrees. For some it’s showing loyalty to things they love, like anime or video games, by purchasing memorabilia and licensed products. For others, it can be drawing fan art or writing fan fiction. Outside of the context of fandom communities, devotion in interpersonal relationships takes on a whole new life of its own.

Devotion in friendships can be supporting one another unconditionally even if the choices that some friends are making may be unhealthy, or it can consist of having your chum’s back, which includes giving them harsh reality checks once in a while. Midnight ice-cream runs for broken hearts, cheesy picnics with cake and boba tea for birthdays, or lounging in pyjamas on the weekends for some local player video game binging—these are all various ways to show devotion to your friends. What about the more intimate connections? The ones that involve life partners? What is devotion in the light of love?

This is another one that seems to have quite colourful reception around the globe depending on a plethora of factors. Some would say that devotion entails fidelity or getting married if someone ends up pregnant. Others would argue that devotion is sacrificing everything for the happiness of the other, and many more things that fill in the grey areas in between, far and wide. The truth is that the very notion of Devotion is a deeply personal one. Life experiences and individual morals and values ensure that loyalty between Persona A and Person B shall always be unique and separate. So, then this begs the question, “Well, what does devotion mean to you, Nyan?”

Devotion for me is a choice. It’s not an inevitability or some grand romantic gesture of affection and dedication. It’s an active choice that a person makes every day in a relationship to love the person they’re with and to stand by their side, shoulder-to-shoulder, through all of the Hell and chaos that life will try to bury a person beneath. In romantic relationships especially, devotion cannot exist without mutual respect and equity. It’s nothing but an illusion if a person isn’t willing to sacrifice as much as they are willing to compromise; models that are actually quite distinct from each other. That’s devotion, and one of the best representations of this in modern pop culture stems from the comics series, Saga by Brian K. Vaughan and Fiona Staples (illustrator) with the couple Marko and Alana.

In a time when the world is cutthroat and dog-eat-dog with the differences between people, I can’t think of a better duo to show us that what we don’t understand doesn’t have to be something to fear or beat out of existence. In a space where being a different colour than your neighbour, or speaking a different tongue is something to scoff and spit at, seeing a couple that represents the brilliance of a united front is so incredibly necessary. Their devotion to one another and to the hope that their daughter shall grow up in a place that won’t judge her or hate her is powerful and wholeheartedly genuine.

Marko and Alana are from opposing places—a planet and a moon—that are at war with one another. Alana was actually Marko’s gaoler. But they fell in love through their shared interest in literature. A cheesy, rompy romance paperback that they chatted about over and over again, which taught them how to look beyond the surface of the obnoxious cover to what’s hidden underneath, in the pages and between the thousands of lines of text, in the blank spaces of the tens of thousands of words to the emotion that’s left unspoken. A friendship took root and from that the most epic love story ever blossomed into a force of nature that has kept them together for years.

When there’s an interracial, intercultural relationship, sometimes things can be excruciatingly challenging. On some level it can’t be helped but to see the flaws and the insults and the hatred that lies simmering at the core (not true for all diverse couples, of course). Decades of systemised racism and xenophobia that is waiting to wake up at the first fight you have just hides in the shadows of insecurities and uncertainties. Yet, you never see that with Alana and Marko. Sure, they are scared out of their fucking minds for their future and the future of their baby girl, but because they have so much respect for one another as equals, they never allow themselves to give up. Not on their future and their dreams for peace, and never on each other. They make an active decision to stick together through all of the bullet storms and homicidal TV-faced royals that are after them. 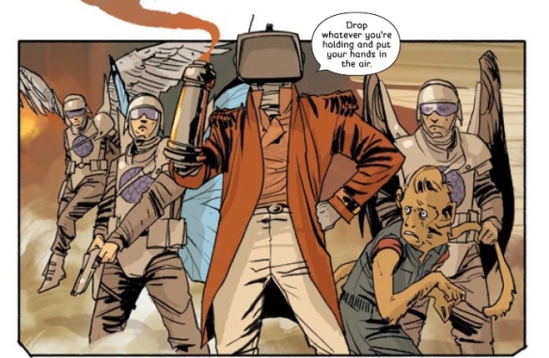 There is one section of the comic where after spending years together, both Alana and Marko question their fight. Are they still trying to find peace and create hope for their kid, or are have they just resigned to being war criminals on the run forever and don’t have the bollucks to admit it yet? They’ve been fighting so much that maybe they’re drifting apart. The space they crave starts to suffocate their intimacy, both physical and emotional. Stepping away, they explore options of what life would be like without the other. They both have a moment where they can choose differently. Their loyalty in that single handful of minutes is entirely to themselves. It doesn’t belong to their comrades or the cause or even their kid. Just them. What does devotion mean to them when it comes down to the individual?

Nothing. It means absolutely nothing because devotion to oneself is a lonely and bitter path of longing and hopelessness, the one thing that they have refused to admit defeat to. Hopelessness. 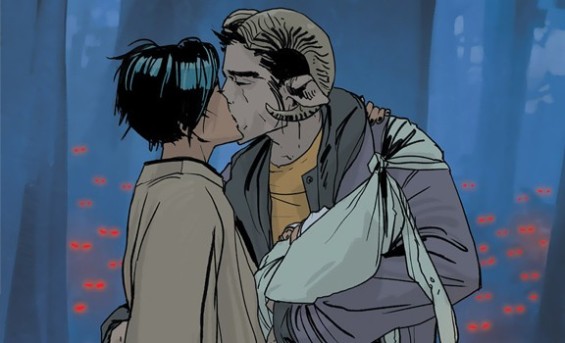 Alana and Marko finding their way back to one another is the perfect encapsulation of devotion because it’s about being selfless while still choosing joy for yourself. It’s about sacrificing in the moment to find common ground in a mutually profound future. What that sense of profoundness means is always going to be distinct from person to person, naturally. Nevertheless, in a relationship, devotion is choosing to have hope and to love as unconditionally as possible. Shit will always hit the fan, spraying the journey with new options and decisions to make. Alana and Marko get their fair share of shit to clean up, figuratively and sometimes not so much. Yet, in the end the only choice that matters to them is the one that is built on hope and the one that will help them create a nurturing space of love for their growing family.  For these two galactic idiots, devotion is love. Love in its most epic and gloriously unbreakable way possible: by choice.