Your Name. (君の名は。) is a 2016 romance fantasy anime film that was written and directed by esteemed filmmaker, Makoto Shinkai, and produced by CoMix Wave Films. The film revolves around Taki and Mitsuha, two young teens who live in very different parts of the country. Taki is a Tokyoite, while Mitsuha resides in a small town that is steeped in tradition. One morning, these two strangers find that they’ve somehow swapped bodies. Using this experience to learn more about each another and their very different worlds, Taki and Mitsuha formulate an intimate connection, a bond that may be the saving grace in the face of a devastating catastrophe.

Your Name. is one of Shinkai’s most popular films, and I can understand why. It has stunning cinematography, a beautifully composed soundtrack, a compelling narrative with characters that audiences can’t help but root for, a unique concept of decimation, and heart-warming romance. These are facets that continuously complement each other to weave a fantastic story of hope and camaraderie that leaves the watcher feeling slightly sorrowful yet comfortably satisfied. Yet, even with these marvellous qualities there is something else that Your Name. accomplishes rather splendidly and that is its critique on how traditional Japanese customs are being erased due to the mass influx of modernisation that the nation seems to be fixated upon.

Your Name. has this elegiac-lyrical sense of mourning that becomes a large theme for its narrative, particularly in its representation of the decline in traditional practises of Japanese culture, which are expressed in breathtakingly melancholic yet joyfully nostalgic ways. These characteristics are what makes the film so memorable and is the main reason that I love it so dearly. 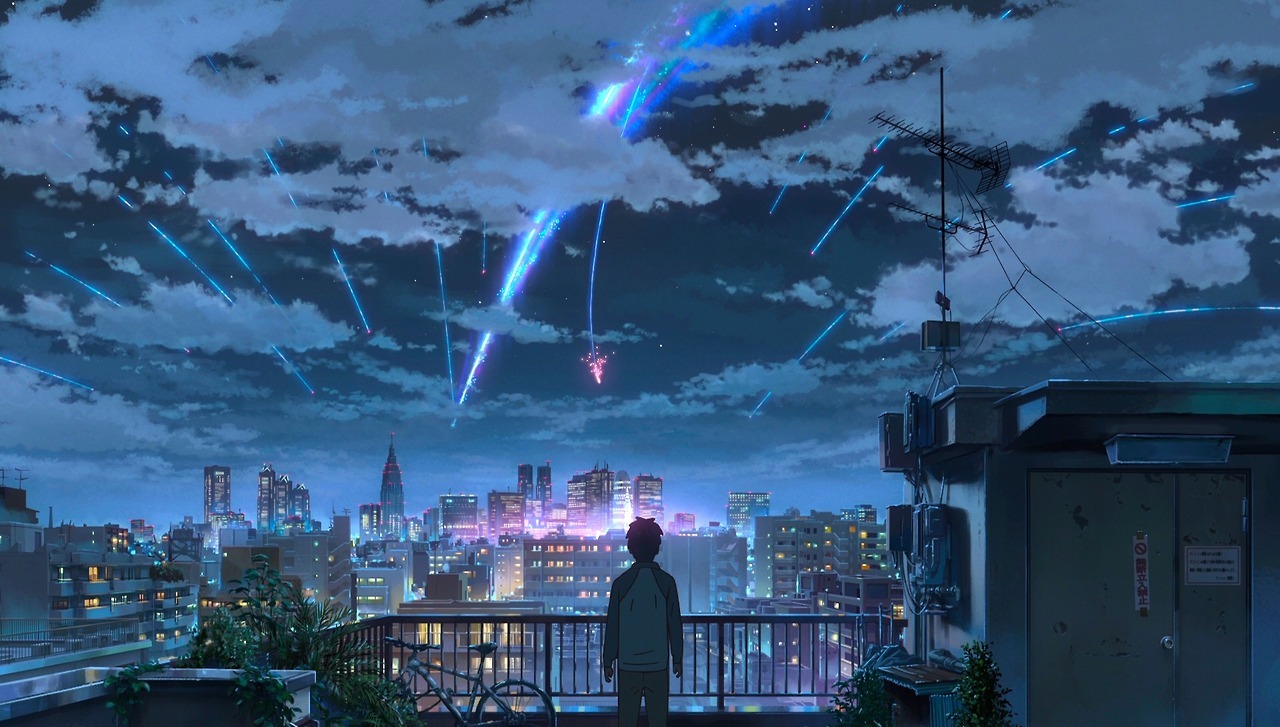 The relationship between Taki and Mitsuha are crafted to become an allegory for how urbanisation is snuffing out small town culture, and if this erasure is caught and understood sooner rather than later, then it’s extremely possible to prevent its demise. The end of tradition has a significant impact on the economical side of a country as a whole, as well as on its identity as a nation, and the main characters each respectfully represent the new and the old, depicting how they’re co-dependent.

Throughout the film we watch as Mitsuha experiences bustling city life via Taki’s body. She eats fashionable foods at fancy cafés (Belgian waffles, for example) and engages in chats with Taki’s chums about the social practises of going on dates and figuring out what makes a girl attractive. Meanwhile, Taki gets to see parts of Japan that he has never heard of, experiencing these folx’ lives and how much their day-to-day is based on age-old traditions. Some of these include the lengthy process of making rice wine (osaké) and the lively ritualistic festivals that Mitsuha’s family is a vital part of. 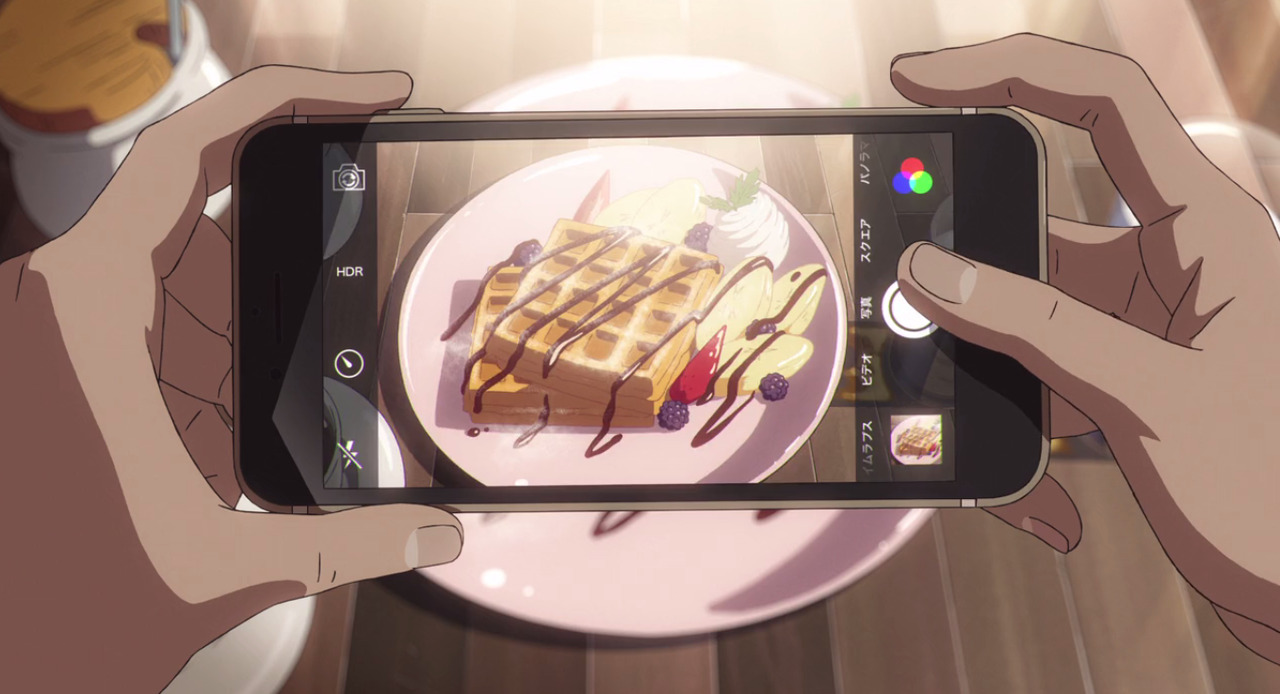 Intrigued by a town he didn’t even realise existed, Taki looks up information about it only to learn of something unbelievably dreadful. In this sense, the future (Taki) is literally seeing pieces of classical, customary Japanese history being wiped out of existence. On the flip side of that, we have the past or essence of tradition (Mitsuha), longing for the bustling unpredictability that comes with urbanisation, only to realise that it significantly lacks the spirit of everything she holds dear, like making wine with her family.

Through their individual journeys, the audience is shown the energetic development and modernisation of a nation that is also obsessed with maintaining a unique sense of self. Yet, the same nation’s focus is centred so heavily on a single aspect that the gradual decimation of the other goes completely unnoticed. They’re literally building over the roots of their heritage to become something that is untouchably separate and original. By pouring the foundation of a future onto the remains of their beliefs, this cultural identity that they crave so desperately becomes nothing more than a ghost of what they cherish; an echo that is unreachable due to how terribly buried it has become, and no one realises it until it’s far too late. This motif of the loss of cultural individualism is breathtakingly—and heartbreakingly—morose.

Nevertheless, it doesn’t necessarily mean that all culture or tradition is irrevocably lost, at least not yet. It’s merely tucked away into the folds of contemporary development and must be rediscovered again, which is signified by the red string that binds Mitsuha and Taki together. A red string, or a red thread, is a symbol of fate and destinies intertwined; something that is common in many Asian beliefs. In Your Name., Mitsuha’s red string (used to tie her hair back) is what connects these two places together, through time and space.

Throughout the film we see subtle references to this string and of the bittersweet nostalgia it represents. On one end we have the roots that initially formed the groundwork of what becomes a busy fashionable city, while the opposite end is the same future that now stands on the leftover bones of those very traditions. Then and now, past and present. When the film begins, the red string of fate is with Mitsuha yet by its finale, the string has found its way to Taki.

Mitsuha and Taki find their way back to each other, bound by that essence of cultural exchange—new and old—that has helped them to construct such an intimate link between their worlds. This relationship is what brings the two together eventually, cementing the allegory that all things in the past remain as whispers in the future and we can’t wholly escape or always bury it completely, so long as the desire to reconnect is there. Something that grows within Taki the more than he learns of what’s at stake of being lost forever.

Overall, Your Name. is a film that is almost a masterpiece in its execution and its storytelling. While it’s not my favourite Shinkai film, it is something that I enjoy returning to in various ways, whether by listening to its exquisite soundtrack or simply by thinking about Taki and Mitsuha and what they represented. As far as watching it, it’s my favourite Spring anime film since it is essentially about starting anew with what we have and what is Spring if not a season for fresh beginnings?

10 thoughts on “Your Name. & the Forgotten Fragments of Tradition – Anime Review”