Meg: The Graphic Novel by J.S. Earls is a science-fiction, stand-alone comic adaptation of the original novel authored by Steve Alten. The story follows deep-sea submersible pilot turned marine palaeontologist, Jonas Taylor, as he’s forced to return to his previous occupation when the prehistoric, long believed to be extinct shark, the megalodon, is unleashed from the icy caverns of the Mariana Trench due to a terrible accident.

The novel, The Meg, was such a fun romp of a read. It became one of my favourite action-adventure novels. The series in its entirety is not the greatest, getting more convoluted with each new addition, but that initial volume is superbly entertaining. When I saw that the comic was based off that and not the film, I became excited for it. After reading it, Meg: The Graphic Novel probably tells the story of the megalodon a lot better than the 500-page book, which says a lot.

It cuts out a lot of the bullshit exposition and details of world-building and environment crafting that creates the bulk of the novel. Since we have illustrations, there is no need for any of that stuff. Instead, the story is stripped down to the dialogue and essential scenes that focus solely on the escape and then the trek to capture this monstrous shark with minor titbits of character revelations so that reader can grasp who the cast members are and what their personas are like. While there is far less material there to really cement a connection between the reader and these individuals who may or may not survive the assault of an eighteen-metre shark, it does contribute to the cheesy aspect of the narrative that works so damn well for The Meg. It’s a tawdry action-packed thriller and the comic doesn’t force it to be more serious or developed beyond that, and that’s what makes it so damn fun.

The pacing was excellent. The story starts by giving us a glimpse into what Jonas Taylor is like in the present times and what some of this personal flawed interpersonal relationships (like his joke of a marriage) consist of. Then we move onto the scenes that trigger that adventure that ends up being the bulk of the storyline. It all flows very easily from one act and scene to the next without awkward breaks or confusing jump scenes that are typical of action comics. The dialogue is also natural, albeit a bit tacky or sleazy at times. The action scenes unfold with tons of excitement, more so when people start dying. All of this would probably be rather boring if not for the gorgeous artwork.

The illustrations are really what brings Meg: The Graphic Novel to life and make it such an entertaining and pleasant reading experience. The art style is akin to retro 90s or early 00s popcorn flicks, particularly in the exaggerated ways that the females and some of the male characters are drawn. They aren’t fashioned to be realistic, but to poke fun at and emphasise the audaciousness of how gaudy this genre can be. I had to keep that in mind when I saw the comic rendition of some of my favourite characters because they looked so fucking ridiculous. But see, that’s the point. My favourite portions where the ones that involved underwater environments or scenes where people were being eaten. The vibrance of the bloodshed and viciousness of a few of their deaths is gloriously crafted, with stunning splashes of reds and oranges in a symphony of blues and whites. Aesthetically, the comic  is just so damn beautiful. I wasn’t expecting this level of attention-to-detail when I initially picked it up. The graphic novel’s artistry is breathtakingly cinematic, more than the film ever was (and I am a fan of the film for what it is). 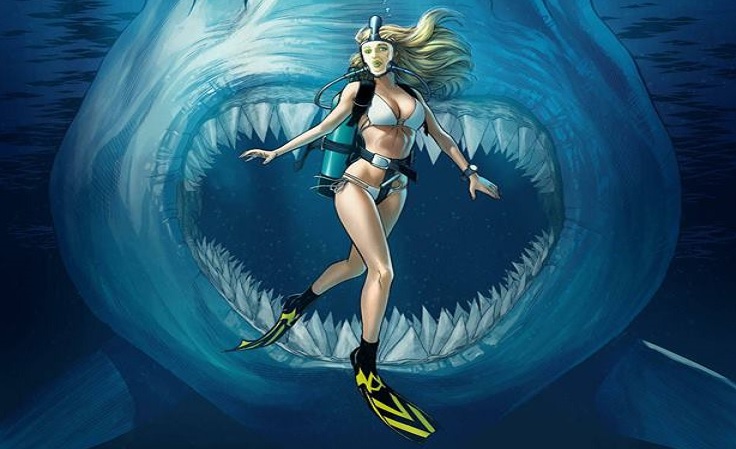 All in all, Meg: The Graphic Novel is a superb comic version of The Meg. I highly recommend it to readers who like cheesy action films or wonderfully drawn creature-features that also spoofs the genre’s tackier characteristics. It’s comfortably fast-paced, doesn’t have a whole bag of unnecessary fluff or padded blocks of information, and is a good time all around.