I came across a really cool post recently about toxicity in relationships and how it takes root when people don’t have the intention of nurturing healthy relationships. This immediately reminded me of a manga series that thrives on healthy connections between people and is what inspired my post today.

My Love Story!! is one of the best romance manga serials that I have ever read. The bonds between folx are portrayed in such uplifting and positive ways without ever losing its sense of authenticity, which makes it an ultimate series to read time and time again, especially during periods when life can make you despair. A huge chunk of the manga’s appeal can be specifically credited to one of the male leads named Takeo Gōda. 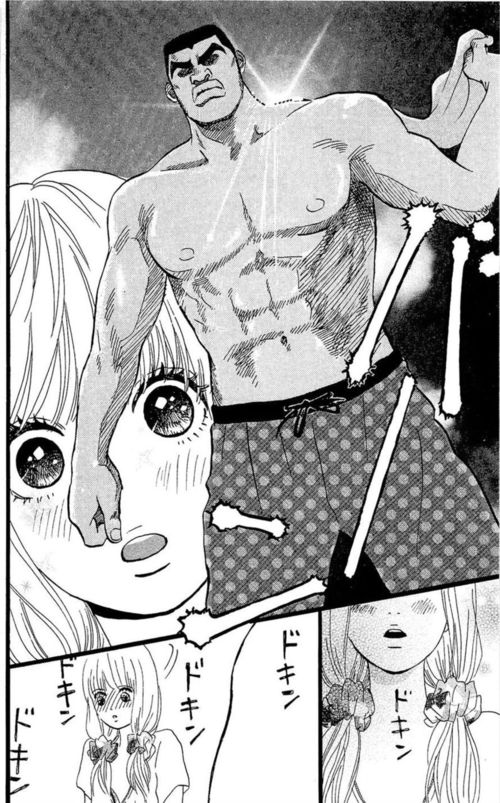 Gōda is a character that is rather different than your standard shōjo male leads. He’s not some slender, bishōnen type of guy with naturally beautiful traits. Instead, he’s supremely macho with huge muscles and resting facial expressions that makes him appear intimidating and frightening. Nevertheless, underneath that scary exterior shell is this wholesome and compassionate young man who adores helping others, even strangers, while making the people he loves smile with each passing day, and he’s the guy whom I’d like to shine some light on.

Takeo Gōda is high school dude that has two people in his life who mean everything to him, aside from his family that is, and they are Yamato (his girlfriend) and Sunakawa (best friend). Through these two individuals, Gōda’s incredible sense of gratitude, selflessness, honesty, and overall respectful nature really shine through; characteristics that help him to build two meaningful relationships that are wonderfully distinct from one another.

Because Gōda is so unlike the standard hero of shōjo manga, or at the very least not the normal type of guy that girls naturally gravitate towards, he never expects to be loved. He has this insecurity of not being good enough, however, it’s never portrayed with a negative lens. Instead, he pretty much just accepts it as a fact of life and goes on doing his thing and living the way that works best for him. Yet, when he meets Yamato, his entire world is rocked because she falls in love with who he is a person (she finds him to be really hot and cool too, which is super cute). Through their budding romance we watch as Gōda struggles once in a while with whether or not he’s good enough for Yamato. This exhibition of his vulnerabilities makes him so sincere in his portrayal and it also goes to show the reader that no matter how strong a person’s emotional fortitude and their sense of altruïsm, it doesn’t equate to invincible self-confidence. Additionally, it depicts that a lack of one doesn’t mean that a person has to be a jackass.

The selflessness of Gōda’s personality is wonderfully pure and is another trait that makes him such a loveable person. He always acts without hesitation, almost like second nature, whenever he comes across any individuals that need help. They can be little old ladies, schoolmates, or other complete strangers on the street. Gōda also doesn’t stop to contemplate if they’re a good person or deserving of such good will. For him all people are deserving of thoughtfulness and that has nothing to do with whether they’re assholes or not. This is something that most humans don’t contemplate half the time. It’s far easier for us to make judgments or hold back due to embarrassment or feelings of great discomfort. We get so focused on ourselves that being able to help others becomes excruciatingly daunting, more so if one suffers from anxiety of any kind. It’s a marvellously honest portrayal of the potential for goodness that humans have within themselves. It’s simply buried beneath layers of other complex feelings and inadequacies that most of us deal with.

This brings me to my last couple qualities that make Takeo Gōda such a kick-ass dude: honesty and respect. His friendship with Sunakawa has always been built on honesty, mutual respect, and a dose of admiration. They’ve been chums since they were kids and have always had each other to rely on through the ups and downs of growing up. We see this quite a bit as Gōda visits Sunakawa for advice with regard to his new relationship with Yamato and then again when Sunakawa deals with a family emergency. They don’t sugar coat the unpleasantness of a situation when they’re talking and that is extremely important in a friendship. It’s good to be able to discuss things that make us uncomfortable or upset just as much as it is to chat about the things that make us feel like we’re flying. Gōda is also considerate of the time that his new romance takes away from his best friend and he works hard to ensure that his friendship isn’t neglected in the process.

With regard to Yamato, they also have unpleasant chit-chats that come up, such as when Gōda and her speak about taking their relationship to the next level with mild PDA or if/how they’ll continue to remain committed to one another post-high school. In both cases, he’s mindful of her feelings while being self-aware that he can be somewhat dense. He also doesn’t allow his personal feelings to prevent her from making her own choices about what she wants to do with her future, and that is an extremely difficult position to be in. Also, if he doesn’t understand something or is unsure about anything, he inquires about it honestly. 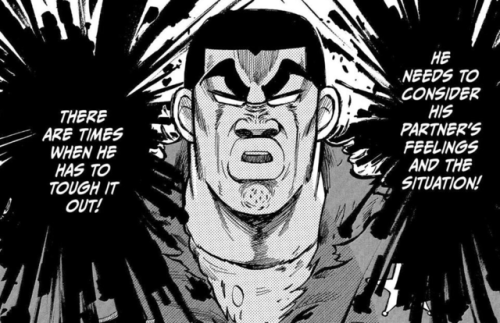 His respect isn’t limited to those he’s closest to either. Gōda is always very respectful of everyone that he meets, treating them with great kindness, even if it’s someone who has hurt him or can come off as being a jerk. The guy never resorts to the same sort of behaviour but instead rises above it all. It’s really remarkable to me, especially as someone who can become driven by their own emotions fairly often (yay for emotional impulsive personas).

Healthy relationships are built on the components mentioned here along with intention and Takeo Gōda shows us that while it can be a lot of work, it counts for a hell of a lot. I feel these are messages that we all need to varying degrees at some point in our lives, particularly when it feels like there is nothing good left in the world around us. I don’t know about y’all, but I’m immensely grateful for characters like Gōda and the heartfelt thoughtfulness that they inspire.