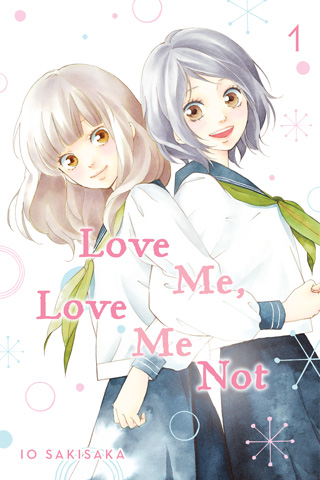 Love Me, Love Me Not Volume 1 (思い、思われ、ふり、ふられ) is the first instalment in a shōjo, coming-of-age manga series written by Io Sakisaka (Blue Spring Ride, Strobe Edge). It follows two main characters, Yuna and Akari, who bump into one another at a local train station. Through a moment of selflessness, one helps the other and they end up formulating a quick and deep rapport.

The story of these two ladies is essentially one about friendship as much as it is about learning to love. The characters have an interesting dynamic going because they are complete opposites in many, many ways.

Yuna is very reserved and loves to read fairy tale romances. Her ideal way of falling in love involves a magical experience with a prince-like boy that will confess to her in some flourishing manner. She also doesn’t have a lot of self-confidence in herself but doesn’t shy away from being emotional. Whereas, Akari is a lot more grounded in reality and deals with romance in a logical manner, which makes her come off as being detached. Akari also doesn’t have the same insecurities or discomfort with speaking to strangers that Yuna has, and unlike her new friend, Akari refuses to show her emotions for fear of becoming vulnerable.

Their inherent disparities is what helps to create a platform for them to build their bond. Initially, I didn’t think this friendship would last because more often than not opposite ideals can cause people to disrupt with differences that are extremely challenging or almost impossible to work through. Since I’ve only read the first volume so far, I can’t say for sure yet if my predictions shall be correct, but I can see the cracks starting to form, and in many ways this is one of the best parts of the story.

Friendships are highly complex sorts of relationships. People are drawn to one another and find comfort and a sense of loyalty amid their camaraderie. There is an intimacy to having a best friend that cannot be found in romantic or familial associations. Because of this closeness, there is also a remarkable amount of trust that goes into crafting and maintaining a long-term friendship. Yuna and Akari became friends very fast, and the trust that they are placing into one another grows with each new conversation and special revelations that they share, especially with regard to whom they are crushing on. It makes the reader want to cheer for them from the beginning. Even so, there is a level of tension that veils their growing intimacy that gives it toxic undertones and it makes the manga so beautifully compelling and melodramatic.

One example is when Akari meets Yuna’s childhood friend, who is a boy, and feels that he is the guy that Yuna should be chasing after. Even though Yuna has no interest in him, the way that Akari is hellbent on this idea starts to simmer up an atmosphere of discomfort and intrigue. On the opposite side of that, there is a scene where Yuna stands up for Akari when the girl’s being bullied by confronting said bully. As awkward and terrified as she is of confrontations, for her to actively jump into one is a big change of character. More nuances like these occur throughout the initial volume, which helps to weave their rapport into a web of subtly conflicting emotions that shall probably explode later on.

Beyond the focus of friendship, I also adored the separate examinations on romance and how different people learn to have very different concepts of what love means. Many people would say that Yuna’s obsession for fairy tales has made her jaded to what real-life romance is like; that her search for the “perfect boy” is outrageous. While others may argue that being rational to the point of coming off as heartless is the real fantasy. Seeing these two wholly contrasting practises unfold side by side while still being interconnected expresses an ability of storytelling that is absolutely fantastic, and also something the mangaka is known for. Blue Spring Ride definitely had it’s fair share of romantic complexities, but it worked in showcasing how well-developed and fallible Yoshioka and Mabuchi were, for example.

Beyond the narrative scope, there is also the artistry to consider. Sakisaka is one of the most gifted mangaka in shōjo. Her dainty and feminine drawings of female and male characters is breath-taking. I love the bright, clean panels and the spaces of white that are decorated with minimalist shading and background details. It brings the characters to the foreground and helps to further emphasis the focus of the narrative on the cast members almost entirely. It also highly complements the youthful, coming-of-age traits of the storytelling. It was what made me fall so much in love with Blue Spring Ride and is what has grabbed my full attention with Love Me, Love Me Not.

All in all, if you’re searching for a fresh and fascinating shōjo manga series to read that has engaging characters and beautiful illustrations, then I highly recommend Love Me, Love Me Not, more so if you were a fan of Blue Spring Ride. The series is licensed by Viz Media and interested readers can check out a free-preview of it here.

4 thoughts on “Love Me, Love Me Not Volume 1 by Io Sakisaka: A Fresh & Fascinating Exploration of Love & Friendship”