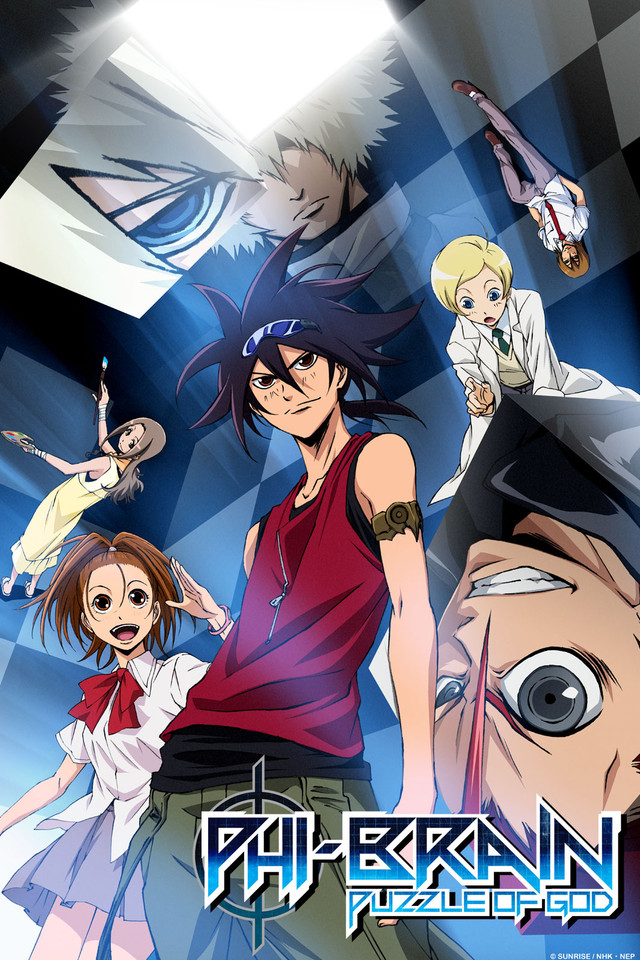 Phi Brain: Puzzle of God (ファイ・ブレイン 神のパズル) is a 2011 shōnen, adventure anime series that was produced by Sunrise studios. Due to its popularity, it spawned a total of three seasons, a manga adaptation, and a video game for the PlayStation Portable. I came across the anime when I hit the Randomiser button on Crunchyroll on a whim. After watching the first two episodes, I feel pretty happy with CR’s unexpected pick.

Phi Brain: Puzzle of God follows a genius puzzle-solver named Kaito Daimon who attends a prestigious high school known for fostering intellectual puzzle-adept people. One day he encounters an unsolvable puzzle shortly after rescuing a fellow solver from doom and gloom. Intrigued by the impossibility of it, he takes on the challenge and in the process comes across an ancient artefact that awakens his full potential, while pulling him into a world of intrigue and high-stakes, dangerous puzzle-solving battles, known as Philosopher’s Puzzles.

I love action-adventure films, the cheesier the better. There’s a list floating around on BiblioNyan that chats about my love of these films and which ones I like to re-watch over and over again (mostly for self-care). Phi Brain reminds me so much of those flicks. There is just something about solving puzzles and following clues to a humongous treasure or some grand, mind-blowing revelation that I find to be a hell of a lot of fun to indulge in. Because of that, I felt immediately intrigued by the premise and then afterward, the first episode of the anime.

A couple of things that make me want to keep watching include the puzzles themselves. I recognise many of them from the surfeit of Hidden Object Games that I have played over the years. So many of the challenges are a variation to one degree or another of the ones from those games. So, stopping the anime to see if I can solve the puzzle myself is rather pleasant. It created a sort of interactive experience that I don’t typically get from other serials.

Reminds me of National Treasure.

Secondly, the cool ways that the challenges are upscaled to a life-size situation is also impressive at times. It adds a layer of slight tension to the events that are unfolding and give the characters something more than just mere fortune and fame to works towards (i.e.: making it out alive or saving the lives of their mates, for example). I’m curious to see how the impending battles shall develop overtime and hope they become much harder and much more dangerous. Currently, they’re proceeding with caution, which is neat, but I want some seriously deadly situations to arise.

I also like the characters. As per typical shōnen fashion, we have our group of dashing young men with outrageous haircuts that like to yell and shout at each other, and sometimes it can become grating, but overall it’s far more entertaining. I like that the protagonist, Kaito, is a bit of an arrogant, sassy-mouthed smartass. He curses a lot, which makes him feel like a kindred spirit. There’s a girl named Nonoha that helps keep Kaito somewhat grounded in his asshole theatrics while looking out for his well-being. I like her because she is fierce and often times seems like someone one should not mess with. Plus, her punching skills could rival Tifa’s, which is scary in and of itself.

Look at that Yūgi Mutō hair.

So, yeah, there are quite a few things that made me feel wonderfully entertained. The only aspect that was a bit funky to me was the music. In the first episode, we encounter Indian mandala music that is infused with a contemporary electronic beats. In the second, the music was far more Latinx-inspired and even used a song in another language (I couldn’t tell if it was Spanish or Portuguese or something else similar due to all the characters shouting). My brain wonders if multi-cultural music will be a regular part of Phi Brain. What made it so funky is that the songs had absolutely nothing to do with the puzzles themselves. That’s not true, actually. The first puzzle had an Indian mandala aspect towards the end, but that was it. The second didn’t have any Latinx or Hispanic traits at all. It was the only thing that felt somewhat out of place to me.

Overall, my first impressions of Phi Brain: Puzzle of God is good, and I look forward to watching more of this throughout the weekend and into next week. As I mentioned above, there are three seasons of it, with the first one consisting of 25-episdoes. So, it’s great for folx wanting to binge something lengthy without it being too intimidating.

You can check out all seasons of Phi Brain over on Crunchyroll.