Storm Front by Jim Butcher is the first book in the urban fantasy series, The Dresden Files. It’s about a wizard named Harry Dresden, living in Chicago, who can be looked up in the yellow pages under his name. He’s not into parties or parlour tricks, but if you’ve got a lost kitty or a suspicious landlord, then he’s the local neighbourhood magic-wielder to visit. When a couple is found to have been completely eviscerated mid-coitus, local police people call Dresden in for his peculiar assistance. As he investigates the heinous crime, he realises that it may be connected to a private case that he’s working, which involves a lady searching for her missing husband.

My first encounter with The Dresden Files was back in 2012, and at the time, I positively adored the book for what it was. It was my first venture into the urban fantasy genre and ended up introducing me to some my favourite fictional characters (in later instalments). However, after reading it for a second time, it’s safe to say that the book is far from perfect and has a few issues that shall be severely off-putting for some people.

A few of my favourite elements of Storm Front consisted of the humour, the noir characteristics, the meshing of magic with a contemporary world, and some of the female characters. Things that weren’t so great consist of the character Harry Dresden himself and some of the narrative dynamics.

Dry humour is one of my favourite things. While the humour isn’t British-level dry and snarky, it’s still witty with much of the characters exchanges consisting of clever, snappy banter back and forth. When it’s between Harry and a beautiful women, the flirtations edge makes those conversations a bit endearing and entertaining. When it’s with foe and foe-adjacent folx, then it helps to build a good amount of antagonistic chemistry and mild tension.

The terse dialogue combined with Dresden’s self-destructive tendencies (mostly when he’s helping others) and the blurred lines between right and wrong in the face of serving justice, helps to give the book a noir twist to it. With Harry’s long coat and dusty hat along with the foreboding weather patterns, the atmosphere can be grim and gritty that is also customary in noir narratives, as well as hard-boiled detective stories, which Storm Front tries to be to an extent, but eventually falls a bit flat in that regard as a whole.

One of the reasons I don’t typically read a lot of urban fantasy is because the use of magic tends to be entirely separate from the more urban aspects. For example, there is always an uncomfortable and awkward placement of magic in a bustling city without the two being woven together in a way that’s complementary. It feels unnatural and forced. But with Storm Front, the clunkiness of two opposites being shoved together doesn’t exist. There is both co-existence of the magical world with the human world, along with healthy conflict that arises from humans having to reside with something they don’t understand. Harry’s use of magic and a lot of the people he encounters who either are familiar with or involved with magic helps to build a Chicago where a life without magic would be unnatural, which is the essence of urban fantasy. 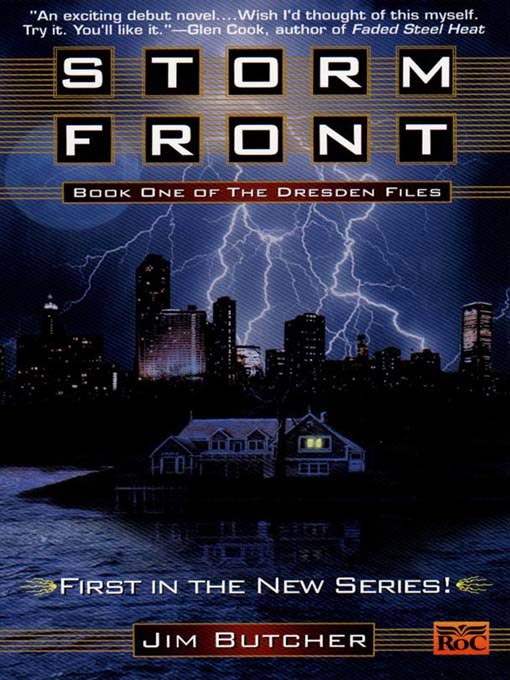 There are a few strong female characters that are introduced in Storm Front, such as Murphy (the detective Dresden works with) and Bianca who is a special character that has a recurring role in future volumes. They are women who are very capable of kicking the asses of anyone who messes with them, and it was neat to see the book avoid being a penis-infested narrative. Although, it can also come off feeling a bit like a harem as they all tend to show some sort of romantic or sexual interest in Harry to varying degrees. My only complaint with the female cast is that they all had vulnerabilities or insecurities that were extremely stereotypical. I feel like for most male authors, if they include women in their books, then those women have to be fucked-up either emotionally or mentally to some degree. It’s impossible for them to write a woman who is strong and independent without any baggage and that is annoying to me. Particularly when you consider how misogynistic Dresden is.

This is the biggest shortcoming of the book, and the one I feel a lot of feminist readers won’t appreciate, I know that I didn’t. Harry Dresden is painfully misogynistic. His views on gender roles are pretty old school. He doesn’t have any issues with working women, or women who are strong enough to beat the shit out of him, but despite those things, he feels so self-righteous in his belief that all women should be protected by men. The dude is also immensely self-aware of this and criticises himself (to a tiny little extent) for being so chauvinist. A few of the females also comment on this (but then find it endearing). When you consider how often he also objectifies the women he encounters, it makes him quite unlikable. There were times when I wanted to watch Murphy, or any other lady, to just deck him for his dumbass comments.  With that said, he does improve with each new instalment of the series.

Dresden’s gross misogynistic shenanigans is a character flaw and it’s very interesting to see him outgrow it (slowly) with each new encounter and case that he comes across in the subsequent books. He doesn’t shake it off completely, but he starts to comprehend how much of a disrespect it is to women and he learns to back off and let women do their thing, protect themselves when they are able to do so. His development across future novels is something I appreciate because I like to see protagonists grow and mature as the story moves along, or what’s the point of a long ass series such as this one? Even so, it’s something to keep in mind if you plan on picking it up but have issues with chauvinistic characters.

Other small things to note include the action. It’s great and ties together the sparkles and pops of magic with bullets and blades excellently. The last fight scene in the book drags on a bit, but it’s not too bad overall. There is a talking perverted skull whom I fucking love to bits. There’s also a snarky, floofy kitty cat that makes me melt whenever he makes an appearance, and there are tons of nerdy pop culture references that made me chuckle sporadically throughout my reading of Storm Front.

All in all, Storm Front is a good first instalment to a lengthy ass urban fantasy series. It’s not perfect or marvellously polished, which I like because it’s indicative of where the author started his writing journey, and it’s fun to literally see his growth as an artist in the future segments of The Dresden Files. I recommend this to fans of urban fantasy, as well as people who want to try urban fantasy to see if it’s a genre for them, as it’s a superb representation of what the field entails.