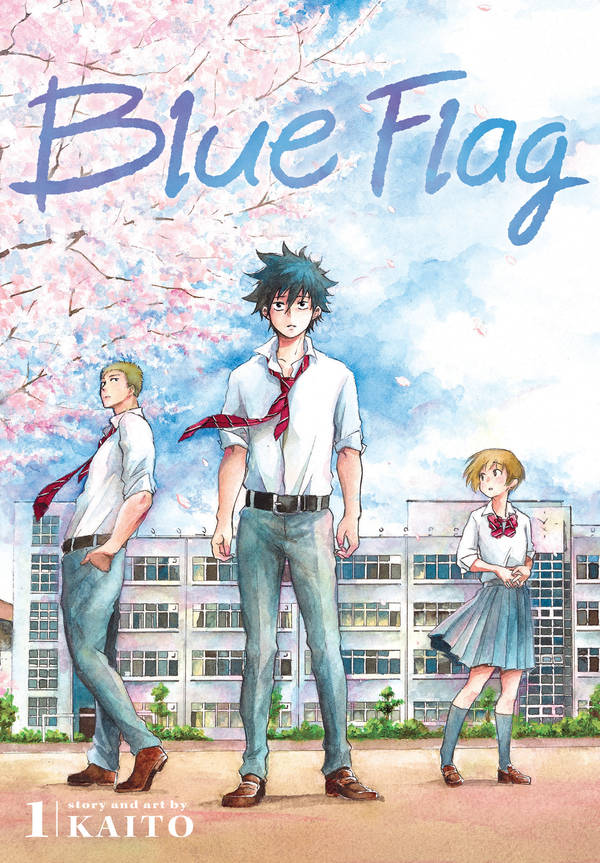 Blue Flag Volume 1 (青のフラッグ) by KAITO is the introduction to a shōnen, romance, coming-of-age manga series about two boys named Taichi Ichinose and Tōma Mita. They were once childhood friends but haven’t spoken in many years. Then at the start of their third year in high school, they were placed in the same class together. While Tōma remembers his friendship with Taichi fondly, Taichi feels incredibly insecure around the supremely popular Tōma, causing him to be a bit standoffish. One day a girl named Kuze approaches Taichi to ask him if he’d be willing to help her win his chum’s affections. Initially, he felt perturbed by her request due to how vastly different she is from Tōma. But after a while, he goes ahead and agrees to give her a hand.

One of the most obvious parts of this story is the love triangle that starts budding off the very first chapter. Taichi recalls what Kuze was like as a child—an awkward girl who was very clumsy, timid, and unsure of herself—and because of how much she reflects his own person, he doesn’t like her. Even so when she asks him for help, something inside of him softens. They start spending a lot of time together thanks to this quest. Of course feelings take bloom, unbeknownst to the characters.

Initially, it took me a little while to get invested in the story because of the predictability of events. However, the charming art style and the impending complications of youthful romance caught my attention in ways that I wasn’t expecting. By the time that I reached the last page of the volume, I was hooked.

A theme that is starting to sprout between the pages of this manga involves the concept of change. When people change who they are in order to attract the adoration of a crush, does that make their feelings or the relationship that comes out of it inauthentic? Is it possible to completely re-order one’s personality and even physical appearance to the traits desired by said crush and still find happiness or self-acceptance? Is that love more fulfilling than one that may be obtained with a person who accepts someone for everything they already are including their beliefs and unique identity?

A few of these items were hinted at in the first volume and I really love these sorts of examinations when it comes to romance because of how relevant they are, even many years or decades down the road. The one thing that never seems to change is this idea that we as humans are never good enough for one another, for a myriad of reasons. I love it more so in manga because the artistry, when executed well, can create some emotionally riveting reading experiences. While the first volume hasn’t evoked any strong bouts of feeling yet, I know it’s coming in the future instalments and I’m extremely curious to see how these questions of self-growth, self-love, and self-identity shall come into play as these characters confront their own desires.

Elements that formulate depths to the dynamic of identity amid love include things like insecurities. As a teenager, it’s so easy to fall victim to everything that we are not. Not rich enough. Not tall enough. Not skinny enough. Breasts aren’t developed enough. The list goes on and on, and for most of us, they are things that aren’t easily outgrown with adulthood. Blue Flag seems to be a series that really tackles these sorts of challenging and oft-times intensely intimate subjects in a subtle and mindful manner.

The characters are also quite flawed, at least Taichi and Kuze seem to be. Kuze has a lot of things about herself that make her unhappy and afraid during her pursuit in obtaining the eye of Tōma. She’s short and awkward and so far on the opposite end of the spectrum of what’s traditionally considered to be “sexy” that her work is humongously cut out for her. Taichi is a geek. He’s not good at sports, he’s short and relatively average in appearance, and he has no confidence. These things make them easy to form kinships to. It can also make them somewhat unlikable as the negativity of their vulnerabilities can become uncomfortable. Yet, that’s exactly the point. Insecurities cause extreme discomfort and impart a sense of alienation from others. The manga does an excellent job of eliciting these responses. But then we have Tōma. In the first volume, there doesn’t seem to be anything that makes him easy to relate to, at least not as someone with any realm of self-consciousness. The dude is walking perfection. To me, that was a huge turn-off. However, the more that I thought about it and the more I pondered some of the exchanges he had with other characters, I started to understand that whether he has them or not them isn’t the case. It’s how deeply buried his personal anxieties and uncertainties are. They haven’t been revealed in any realm of detail yet (just teased at), but I feel like this will be key in crafting a genuinely compassionate tale of youthful first loves, with a unique twist, and I look forward to seeing it unravel.

Taking these themes and combining them with a very clean and graceful art style just makes the manga significantly alluring. I love romance serials with tons of open spaces and white panels. It’s visually breath-taking, but it also allows for fantastic contrast when the emotions get darker later on. Typically, those panels of white and dainty charisma follow suit with heavier shading and more focused details, outlining the character’s emotional turmoil magnificently.  We already see bits of this when Taichi loses his temper during a particularly frustrating exchange. It was superb.

All in all, Blue Flag shows immense promise. It has a compelling story that is character-driven with thought-provoking themes and splendid illustrations. If you’re in the market for a romance, coming-of-age story that is also perfect for reading in the Spring season, then I recommend you check out Blue Flag Volume 1.  The series is licensed via Viz Media and interested readers can try out a free-preview of it here.