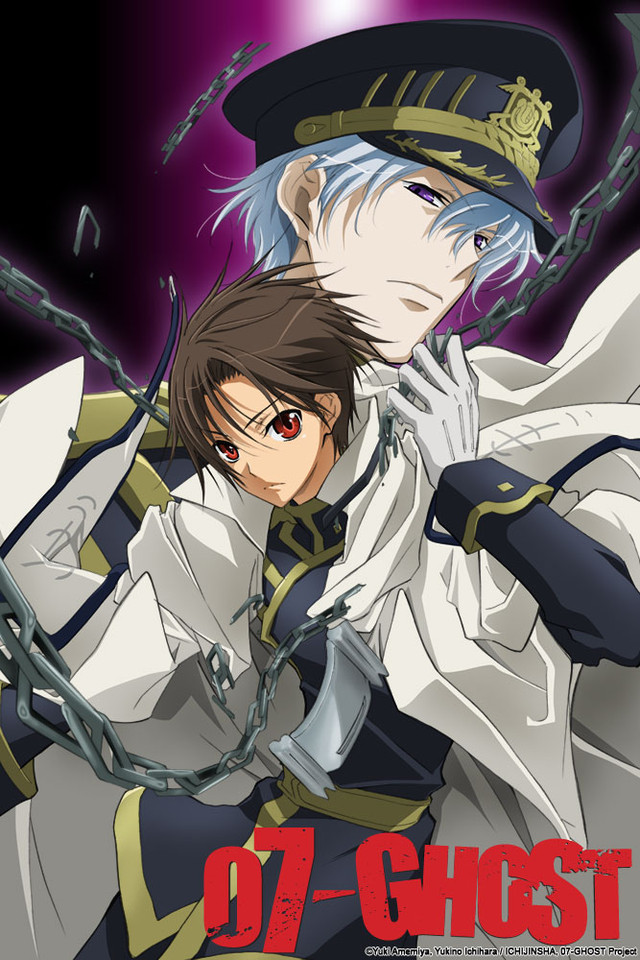 07-Ghost (セブンゴースト) is a josei action, fantasy anime adaptation of the original manga written and illustrated by Yuki Amemiya and Yukino Ichihara, respectively. The anime was produced by Studio Deen in the Summer 2009 season with 25 total episodes. My decision to watch this old-school title was purely happenstance. I have a Death Star mug containing a pile of tabs with anime shows/films. Whenever I’m in the mood to see something on a whim, I pick from the mug and voila! Spontaneous watching adventures ensue.

07-Ghost revolves around a former sklave (German for slave) kid named Teito Klein who is a student at Brasburg’s Military Academy, along with his best friend and bunkmate, Mikage. This place is where elite soldiers are trained for service to the empire. One night shortly after completing his final exam for graduation, Teito meets a man named Ayanami. The encounter triggers severely traumatic memories that Teito’s brain had hidden away. He remembers Ayanami murdering his father before his eyes. Overwhelmed by intense shock, rage, and grief, Teito attacks Ayanami on the spot, thus becoming a fugitive to the empire that he had trained so diligently to serve.

I had no idea what to expect going into this anime. I didn’t look up a synopsis, only the genre, because I thought it would be more fun that way. While I found the pilot episode to be rather pleasant and suspenseful in the second half particularly, I also think it’s setting up the story to be mildly predictable.

One of the first things that went off as a red flag (with regard to predictability) in my mind is the friendship that Teito has with Mikage. It’s very wholesome and cute, however, the duo had many interchanges where they repeated how much their friendship meant to them and how they would always be loyal to one another. For me, that’s a humongous hint that they will probably end up on opposite sides of a conflict or commit a terrible act of betrayal. It was all very Code Geass in that sense. I also sensed a teeny tiny bit of boy love essence, but that could totally be wishful thinking on my part.

Look at that li’l shit-eater grin. I love it.

Another aspect that had me feeling the déjà vu vibe was Teito’s flashback of his father’s death. I want to preface my musings by stating that these aren’t spoilers. These are just my own thoughts and predictions as to what may come. Seeing his father’s death makes me realise that Teito was passed off as a sklave for his own protection, more so when one considers who his father was (mentioning that would be a spoiler). The mess of political intrigue that shall pursue these revelations is a classic trope in fantasy narratives. There’s going to be vengeance and shifting alliances and all sorts of big unveilings of treachery (if developed well, and again, this may be wishful thinking). Even though it is all somewhat obvious, I feel quite intrigued to watch the Hell of this situation break utterly loose.

Which one is big baddie bastard?

Another minor thing that I thought was curious includes the magic system. When people use magic in this world, a stream of an ancient language appears and swirls around the user until it’s directed at an enemy/opponent. Then it wraps around them while it executes whatever spell or action is being performed. I have so many questions about it because I think it’s a cool method of implementing magic into the fantasy narrative. I’m only worried that it won’t be further explored in the anime, which, if that’s true, would make me very sad and unsatisfied.

Some things that people may not like about the series includes the average and somewhat poor animation style and the relatively bland opening/ending songs. I’ve seen serials much older than 07-Ghost with far superior animation quality and it’s the only thing that bugs me a little bit, but not nearly enough to make me stop watching. It’s a supremely minor irk in actuality.

All in all, that’s all the stuff that I gathered in the first episode. I shall either be way too on point, or completely incorrect, or maybe even somewhere in the middle. No matter which of those ends up being true, as long as the series is written well, I strongly feel like I’m going to have a good time with it.

You can watch 07-Ghost on Crunchyroll and on Amazon Prime with the Viewster Anime add-on.