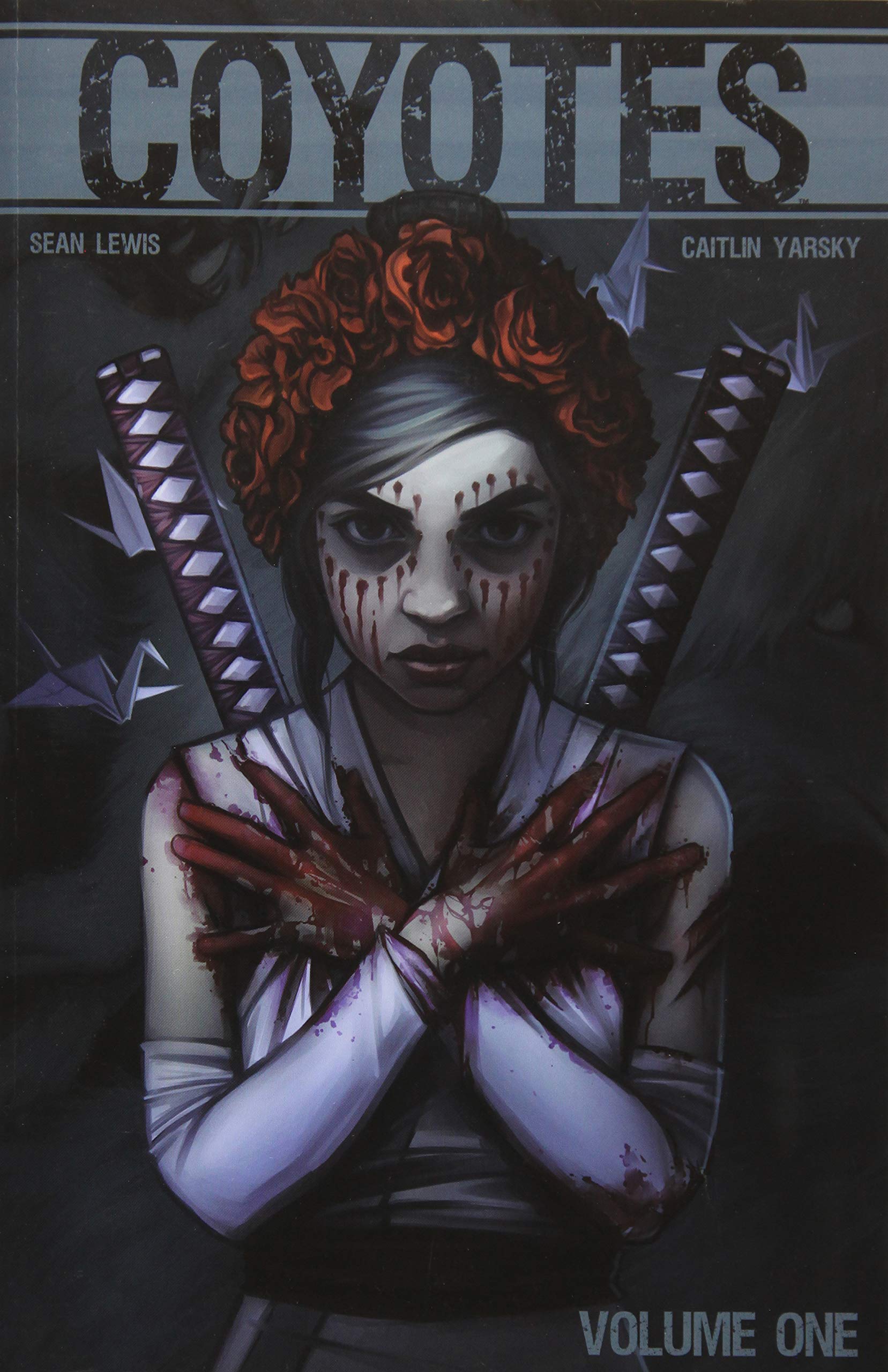 Coyotes Volume 1 by Sean Lewis and Caitlin Yarsky (art) is the first instalment in a horror, folklore fantasy mini comic series. It follows a young girl who—in the wake of her sister’s disappearance—is chosen as the champion for a group of women that fight vehemently against the malevolent pro-patriarchal forces hunting them.

Coyotes was an anticipated new comic series as it was receiving rave reviews from around the comic-sphere, and while there were some great elements to it, the initial volume fell a bit flat for me as a whole, particularly in its feministic motif.

There were a few things that show a ton of promise in Coyotes. Firstly, the premise is pretty fascinating. It takes place in a dusty Latinx Western setting and is about coyotes hunting the women of the City of Lost Girls. After getting fed up of being slaughtered one-by-one, the women arm themselves and fight back. I had never read anything quite like it, even though the basic foundation for the story stems from beloved tropes of the medium and genres.

Secondly, the story is dark and grim. With what amounts to a war and people vanishing/dying in savage ways, there isn’t a lot to give the readers a sense of warmth or positivity. However, it does make the story immensely compelling  because you can’t help but root for these women. The desire to see them kick serious ass becomes strong and quickly.

The last couple things I adored complement one another somewhat. The volume was fast paced, which is increased by the death and mayhem, as well as the inherent commentary on men’s natural instincts versus that of women.

So, the whole thing is essentially an observation of how man’s innate desires for control and the violent compulsions that come naturally to them shall eventually make them supremely abusive, especially towards women and strong, self-assured women at that. Most men put on “costumes” to hide their true nature from the people around them. In Coyotes, men actually attire themselves in pelts, or costumes, in order to unleash their barbaric and brutal animalistic impulses under the guise of anonymity. Women on the other hand are shown to be more compassionate and willing to nurture and implement nonviolent methods at resolving conflicts. But that doesn’t make them weak, for they aren’t afraid of standing up for themselves and their own if the need arises, which can sometimes lead them to becoming far more violent than their male counterparts. In many ways, this illustrates a greater strength and sense of character, making women better leaders, unifiers, and heads of households. In a nutshell, it’s all a strange exploration of new age feminism, and even though I appreciated what was going on, there are some major flaws in the notion shown therein.

Feminism in Coyotes is depicted as being aggressively anti-male, which is a completely inaccurate representation of what true intersectional feminism entails. Feminism isn’t about making women superior to men, or to paint them as the stronger gender. Feminism is about equality for all regardless of constructs like gender, race, etc., whether it’s in professional, personal, or interpersonal situations. Equal pay. Equal roles in a relationship or family setting. Equal opportunities to grow based on skills and abilities in the workplace, not gender. Equal options for adoption. You get the picture. So, to have a story that talks about being pro-feminist and then turns around and degrades a specific gender as being inferior or needing to be put in their place, so to speak, feels incredibly inauthentic. Even so, the discourse on how it’s ridiculously easy for men to behave like entitled bastards when it comes to separate genders was something that I did appreciate and acknowledge, even if I don’t agree with the overarching message that stems from it.

A more narrative-specific quality that I didn’t care for is the inclusion of the single man who is painted as being decent (so far). He’s a White dude who works with the women to fight the aggressive coyotes, although he’s not particularly good at it. His presence was utterly laughable and completely pointless. In some ways, it felt like he is there to become the White Saviour of the series later on, which is bullshite. The whole damn volume is filled with brilliantly badass Latinx women, and to have them relying on a White guy that is kind of a moron defeats the purpose of the rest of the characteristics that form Coyotes. It also reeks of White Feminist conjecture, which is already toxic enough, and, once more, goes against true feministic beliefs.

Also, the use of Japanese katanas as the weapon of choice for the protagonist made me roll my eyes so hard. In a setting of Latinx practises and culture, having the young woman protagonist wielding Japanese katanas (she got the idea from watching old samurai films) was the most unoriginal thing around. Why? That’s my biggest question. When there’s already a richness of another culture, why not draw inspiration for weaponry from the same culture? This is why White people shouldn’t write narratives about diverse cultures that they know very little to nothing about. It’s not fucking seasoning for a pasta dish; you can’t just pick and choose and mix and match. Not to mention it’s the most obnoxiously cliché trope in the medium.

The artwork can be considered to be the saving grace for Coyotes. Yarsky is a new author on the scene and her work consists of modernist stylistic designs with some sharp angles and thick lines depending on the palate scheme for the specific scenes. The medium-contrast palettes are gorgeous with warm yellows, maroons, purples, and blues. The flashback sequences are all done in low to medium-contrast black and white that utilises colour pop for emphasis on key elements where necessary. The violence portrays blood spatters and people being bitten and ripped apart, yet it never shows it in an ostentatiously graphic or gory way, making it more palatable for readers that may find extreme gore to be triggering.

All in all, Coyotes Volume 1 shows a cool concept and some interesting themes, yet it’s far from being the mind-blowing masterpiece that so many people are painting it as. It’s definitely not as original as it gets credit for either, as is evident by the inclusion of katana-wielding females or having a Chosen One basis for all the shenanigans that take place. I feel that this would have been much better if it were #OwnVoices as the cultural and feminist elements would be more accurate. As it stands, I’m indifferent on whether I would recommend this or not with a heavier veer towards not.

2 thoughts on “Coyotes Volume 1 by Sean Lewis & Caitlin Yarsky: A Cool Concept that is Murdered by Cultural Hack-n-Slash & Timeworn Tropes”