The world is currently filled with bewilderment. Due to the pandemic, so many things have changed. People have been forced to acclimate to the situation in ways that they probably never thought possible. We have all either gained or lost something to various degrees, and in some situations it’s a bit of both and lots of in-between. That is why for May, OWLS decided to focus our theme on “Adapting” in an effort to highlight the beauty, the difficulties and struggles, and the sense of enlightenment that stems from having to adapt to uncertainty. To focus on media and characters who have made changes within themselves or in their lives in order to adjust to the shifting world surrounding them. When I sat down and pondered this topic, GTO: Great Teacher Onizuka came to mind almost immediately.

GTO was a bit of a no-brainer for me because it reminded me of how much education has changed during COVID-era. School systems and the very foundations of how education functions in this country has been shaken to the core. Many students have been forced into online learning environments. Colleges have eliminated age-old prerequisites for admittance, illustrating that these institutions were built on the prowess of privilege, which is a construct that no longer has a place in an environment that’s fighting for the bare bones of survival. With respect to actual classrooms, the burden of educating kids has been handed over to parents, parental figures, and guardians to share in equally. There is more reliance on family involvement, more pressure to study independently in order to maintain specific grade level knowledge, more responsibility overall being passed around from educators to other folx that kids look up to help guide them. Yet, what happens when a child has a crummy home life? What happens when the responsibility that has been passed along falls apart because kids are being abused, abandoned, or worse? Who is going to step up and help then?

In recognition of these issues and how vital they are in helping students succeed, both in and out of the classroom, I decided to shine a light on one of the best teachers in pop culture, Eikichi Onizuka.

The core premise of GTO is learning to adapt to help kids with whatever their problems are, both inside and outside of the classroom, even if such changes will make a teacher uncomfortable or push them to the bounds of their fortitude. Going the extra mile to make sure that a child has a decent chance at life, which sometimes means giving them a swift metaphorical kick in the arse if the need arises, is exactly what being a teacher is about. Realising Change is Necessary & Adapting to Enact It

The chairwoman of the school where Onizuka is eventually hired to work realises that she doesn’t have the proper tools to help the problem children at her school, Holy Forest Academy. She also recognises that the teachers who work at the academy either don’t have a willingness to help out of circumstance or that they are afraid. There are also those that don’t care enough about the students to take a chance. The job ends for them when school is out for the day. When Onizuka performs a German Suplex on one of the educators who treated a student like trash, she knew she found the person she needed the most to make the necessary changes in order to help her students.

This was an excellent scene because it portrayed the Chairwomen’s perception on the essence of being a teacher. It’s not all academics, but it’s also about acquiring tools to help kids live their best lives. It’s needing to adapt from traditional and rigorously pretentious traditions in order to uphold the value of leaving no child behind.

The Chairwoman makes her plea.

After Onizuka begins working at Holy Forest Academy, he helps virtually every student that crosses his path. He helps Noboru when the kid tries to commit suicide (twice) after being relentlessly bullied. He does this by shining a harsh light on the source of the ugliness that causes Noboru’s bullies to be so violent (abandonment issues at home). In another situation, he helps a genius to learn the value of living rather than merely existing; someone who suffers from depression and loneliness after being verbally accosted by a teacher she trusted dearly. Then there is a woman that’s actually a colleague of Onizuka’s. She questions her self-worth as an educator and he helps her to adapt her perception on what it means to be an educator, which inspires her to help her students in a brand-new fashion. A group of students misbehave terribly, causing a raucous on campus every day. They even threaten violence on their teachers. When Onizuka learns that they are doing this because teachers have always equated them to trash for either having a low IQ or from having poor family backgrounds, he reprimands the teachers and shows these kids that they have other strengths and people who insult others are the real trashy individuals because they have no self-respect for themselves so they can’t give it to others. Lastly, and one of my favourite scenarios, is when he helps a single mother realise that her son, Murai, is growing up to be a jaded and sexist person because of the lacking presence of a father figure in his life. Even though this brat and Onizuka bash heads often throughout the series, the long-term influence that Eikichi has on Murai with how he grows to respect women and eventually helps others around him are wonderfully rendered. 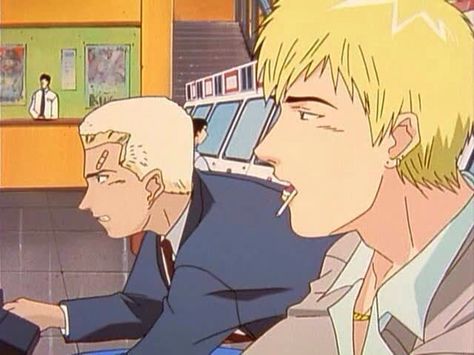 Onizuka helping Murai overcome his complexes with one video game ass kicking at a time.

Onizuka understands that a kid will never succeed if they are always made to feel worthless, like they are trash or punching bags. Children need to be nurtured as much as they need to show that life is tough and sometimes you need to trudge through the mud to make it. He also recognises that helping kids isn’t a one solution fits all gig. Every child is different and in order to help them individually, one has to be willing to adapt their methods, understandings, beliefs, and more to incite positive changes. Being able to look beyond the confines of polished school hallways and blackboard-adorned walls, and having compassion, patience, an open mind, and willingness to face whatever arises is what separates a teacher from a mentor.

3 thoughts on “OWLS May 2020: Great Teacher Onizuka & the Gratification of Mentorship while Adapting to Student Suffering”