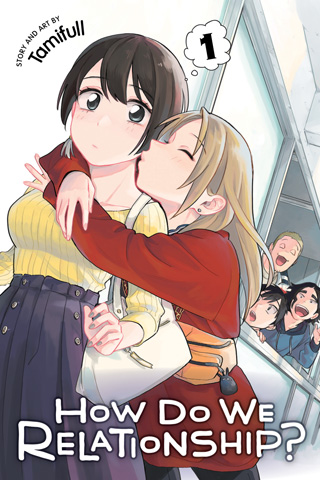 How Do We Relationship Volume 1 (付き合ってあげてもいいかな) by Tamifull is a shōnen, yuri, romance manga series that is an adaptation of a dōjinshi. The story follows a timid lady named Miwa who’s a college student. For as long as she can remember, Miwa has always been attracted to women, sexually and romantically, yet due to her reserved nature she’s never really come out to many people. In college, she meets a young girl named Saeko who is outgoing and confident in ways that Miwa has never been able to be and may just be the gal to help Miwa to leave her shy shell behind.

When I first saw How Do We Relationship, I thought it was going to be a rather cute, sapphic (lesbian or yuri) manga series, particularly with coming out and self-acceptance, and while the manga does possess those elements to certain extents, it ended up being frustratingly convenient in some ways while wholly unrealistic and immature in others.

One thing that I tend to loathe in romance is convenience. I don’t like people who begin a relationship out of convenience and I especially don’t like it when it happens between two almost total strangers versus people who’ve been friends for quite some time. The relationship between Miwa and Saeko is exactly that: an accessible falling together of two individuals who are lonely and seeking companionship after they reveal to each other that they are gay. Neither of them can tell if they have any realm of romantic attraction to each other and make the decision to basically “figure it out” as they go. Granted, the core reason for them getting together can be attributed to a significant lack of relationship experience, however, it still felt extremely fabricated and forced, which made me root against them rather than for them.

Saeko is portrayed as being masculine, as well as trashy and easy, which becomes a source of strife in their relationship early on as they have difficulties with initiating and establishing a comfortable realm of physical intimacy. Miwa is feminine and basically desired by all the people wherever they go, however, her timidness and uncertainty of Saeko’s feelings for her make her incredibly insecure. The more we see of their relationship, the more I found myself cringing. Unable to define their feelings, hesitancy at engaging sexually, rarely going out on actual dates to deepen their emotional intimacy, and making a relationship seem like it can’t survive on anything aside from sex were all the things that made me want to bang my head against a wall. Combine it with virtually no chemistry whatsoever, you have yourselves a disaster of a narrative.

I am asexual, but I don’t have problems reading about sexually active relationships. Before I came out and accepted my own sexual identity, I had experienced pleasant relationships with physical  engagement, and because of those experiences the biggest dissuasion for me from enjoying romance stories where sex is a big deal is the complete dearth of chemistry. It makes for an extremely boring and painful expression of romance, more so when it’s trying to be cute and charming (another failure) between two people who know absolutely zilch about one another.

I also didn’t really care for the artistic style of the manga. The environments and backgrounds were lovely with a nice balance of greys and fine line details. However, the characters are way too cartoony (not a style I personally care for in manga mediums) and clashed with their surroundings to a certain extent. Additionally, it made the sex scenes feel comical. Like, I couldn’t take them seriously at all (more so than normal). It ultimately just contributed to the disconnected vibe I had going on with this story.

Overall, I didn’t like How Do We Relationship Volume 1. I mean, you don’t just jump into a relationship with someone without even realising if you have any ounce of feelings for them at all—emotional or physical—and you sure as hell as don’t do it if you think the other person is a “slut,” and untrustworthy because of it. The one-dimensional characters and utterly uncompelling romance make this a below average reading experience all in all.

How Do We Relationship Volume 1 hits shelves tomorrow. Interested readers can catch a free preview here.

2 thoughts on “How Do We Relationship Volume 1 by Tamifull: A Yuri Manga with No Chemistry & a Frustratingly Convenient Romance Dynamic”