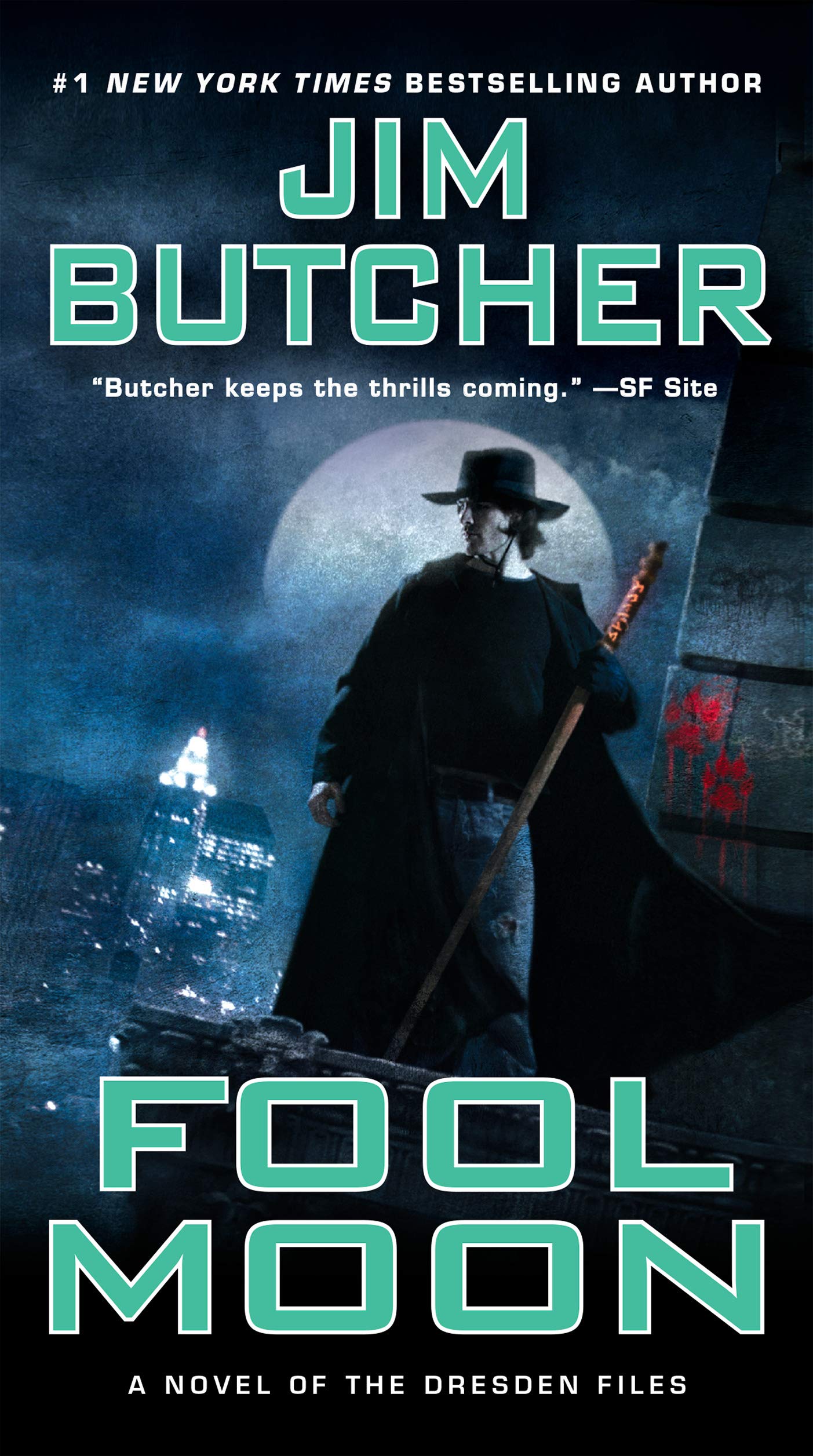 Fool Moon by Jim Butcher is the second novel in his adult urban fantasy series, The Dresden Files. It follows Harry Dresden, our cantankerous detective wizard man, as he is called in to assist Detective Murphy on a new case involving grisly and gruesome murders that occur around the same time every month. People are showing up being shredded to bits. Harry and Murphy try to solve the case while evading sneaky and suspicious FBI agents, an invasive investigation from IA (Internal Affairs), and some spoopy folx who have no qualms about killing those who get in their way. This was a re-read for me after many years.

In a lot of ways, I enjoyed Fool Moon more than Storm Front because it is much more adult with its graphic and gory details and it also reads much more quickly than the pilot novel. However, by the time I reached the finale, I still felt pretty meh all around.

Okay, so the good parts first. As I mentioned, it’s very gory and grotesque in the descriptions of the bodies. You can practically smell and taste the blood and flesh, which for folx who get queasy, will be off-putting to say the least. The author definitely didn’t shy away in the details here. Even though it’s stomach-churning at times, it also helps the book to immediately hook the reader into what is going on because a morbid curiosity arises about who (or what) could have committed such a heinous crime. The book then rides this wave with virtually non-stop action (once it kicks in within the first one-third of the novel) until the very end.

The action sequences are combined with the dramatic element of Murphy being investigated by IA due to the events that took place in the first book, Storm Front, adding a layer of tension. Couple this with Murphy and Dresden going rogue in their own ways to solve the case above all else (like saving their own arses or getting fired) helps the reading experience to be relatively fast-paced, yet it also came off as somewhat over-the-top in the last quarter.

Narrative-wise Fool Moon is predictable to various extents. The first two or three chapters make it supremely easy to decipher which supernatural being/situation Dresden and Murphy are facing off with. With the presence of IA and the FBI being tossed in, it also becomes fairly effortless to foresee how that spot of drama will get wrapped up by the last page. Even the culprits are apparent by the halfway mark. So, if you’re searching for something to ooh and aah you, you won’t really find it in this book.

Curious portions include a brief hinting and small revelation at Dresden’s past, particularly where his parents and their deaths are concerned. Of course these things will play a part in the overarching story in later volumes (I’ve read a couple of them), so seeing them brought up here so slightly felt like a tease as much as a set-up for book three. While much wasn’t shared, I feel that just enough was provided to whet the appetite appropriately.

Things that I didn’t care for include Harry’s chauvinistic attitude on how women should be protected, even if they are capable of kicking arse. Dude, there are quite a few women in this instalment that I wouldn’t want to face off with at all as they are fucking terrifying and badass, so his chauvinism is annoying and uncalled for. Although, this is something Dresden is pretty self-aware about and does try to improve upon as the series moves forward. It merely takes a slow time getting to it.

Overall, Fool Moon was an entertaining, popcorn-type book. It won’t blow your mind, but it is a good, vicious romp through urban fantasy that I do recommend for folx who aren’t looking for too much of a serious read from the genre. Just know that it’s not perfect by far but does improve a bit with each new volume.

4 thoughts on “Fool Moon (Dresden Files #2) by Jim Butcher: A Gory & Vivid Romp Through a Predictable Plot with Badass Ladies”