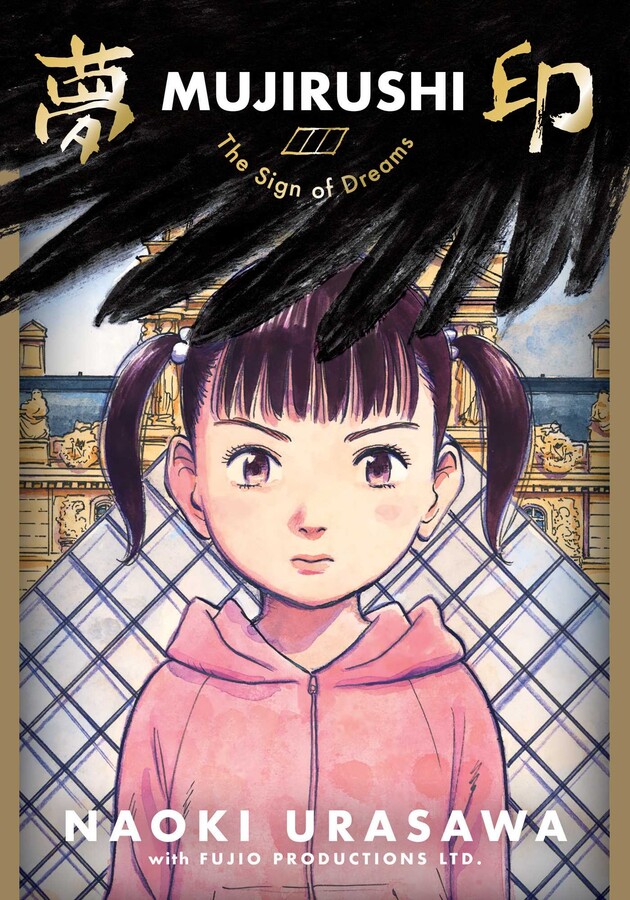 Mujirushi: The Sign of Dreams (夢印-MUJIRUSHI-) by Naoki Urasawa is a seinen, mystery, drama manga about a father who evades taxes to save money so he can take his family on a cruise, but then he gets caught and loses everything, including his wife. One day, while he wanders the streets with his daughter, feeling hopeless and depressed, he comes across a strange sign that leads him to an even stranger man that promises to help change his fate.

I was very excited to pick this up as the mangaka is a brilliant creator known for his masterful works Monster, 20th Century Boys, Pluto, and Master Keaton, to name a few. I was expecting a bit of mind-fuckery as that tends to be a common motif in his works, and while there was a tiny dose of that here, overall Mujirushi’s story as a whole was a bit average. Even so, there were some cool themes that kept me pretty engaged from beginning to end. Some of my favourite aspects of the manga include the portrayal of mothers as selfish beings, the notion that everyone views the world differently, the satirical admonishment of political figures’ two-faced theatrics  (mostly American), and the incredible artwork.

A trend that I’ve seen in this manga is the notion that no matter how loving or nurturing mothers are, ultimately they shall leave their families behind in the pursuit of personal happiness. On one side you have a mother that is irresponsible, and her selfishness is looked at as a complete lack of respect for her kid, while on the other it’s viewed as a source of inspiration to follow one’s dreams no matter where it shall lead. I think this is an excellent representation of nurture versus nature as it relates to being a parent and what our instincts tell us. It’s also a testament to how mothers treat their kids while being around them shall influence them later in life. I’m not sure if this was done on purpose or if I’m just seeing these cool themes because of how I read and perceive narratives in general, but either way, it was something that made the manga deeper and more meaningful, especially in the sea of all the chaos that unravels between the pages.

The manga also heavily pokes fun of political figures, specifically American politicians. There is a character named Beverly Duncan who is a weird mutation of Trump and Hilary Clinton that is shown to literally be in bed with an individual that illegally funded her campaign and who’s also a manufacturer of illegal nuclear weapons. I laughed and cringed simultaneously because of how close to home it was (I live in America). It’s a great representation of how the world views the U.S. and I honestly can’t really blame them given our current political… disasters.

The bulk of the manga is devoted to this theme of how every person views the world through a different pair of lens. Our experiences, biases, etc. allow us to see shades of green whereas another individual would see blues or oranges or even pinks. These predispositions prevent us from seeing the picture as a whole, hiding some other very vital portions. Once again, I found myself contemplating the current political climate and how much the world has changed in the last few years to a darker and more depressing place, and I couldn’t help but ponder how different and vibrant it would be if people would put aside their prejudices to listen to others so we can work together and try on different lens to understand the things that make us uncomfortable. I love that Naoki Urasawa does this with his works and it’s one of the reasons I admire him so much.

If there is one thing I could criticise about Mujirushi, it’s the way the story is set up. There are a lot of subplots that can feel confusing, and it creates a disconnect between the reader and the manga, however, if one can stick it out to the end, they’ll see that it all does in fact connect and comes together to build a bigger picture (oh look, that theme I was chatting about earlier) and provide a fuller understanding of what the story is trying to portray. The story itself is a bit of a rollick, a bit of an exploratory commentary on the art world, and a bit of an examination on broken family dynamics. Each element has its subplot, however, they each also complement one another to express a tale that incites deeper thinking about life and one’s place in it, especially as it relates to having dreams or aspirations and pursuing them.

The artwork is absolutely incredible, as is expected of the mangaka. It uses lots of detail and intricate linework to create some amazing scenery and settings. Even the sardonic representations of certain characters is done marvellously. The facial expressions are prominent and match the dialogue exchanges superbly. I actually wouldn’t mind an anime film or OVA series for the title because I think it would do very well.

Overall, the initial storytelling style can be off-putting for Mujirushi, but if you’re a fan of Naoki Urasawa’s narrative style and use of artistry to portray some deep, intellectual themes and motifs, then I highly recommend Mujirushi to you. It’s a stand-alone volume (approximately nine chapters) and can be read fairly easily in one sitting. Even though the beginning and middle can feel jumbled, it reads pretty fast as well.

You can pick up a copy of Mujirushi: The Sign of Dreams from your local retailers. The manga made it’s US debut on 21-July-2020! For more information on this title, please check out it’s VIZ Media page!

Please note that I received a free copy in exchange for an honest review, courtesy of Viz Media.

6 thoughts on “Mujirushi: The Sign of Dreams by Naoki Urasawa: An Excellent Rollick that Explores How Personal Perception Influences the World of Individualism”