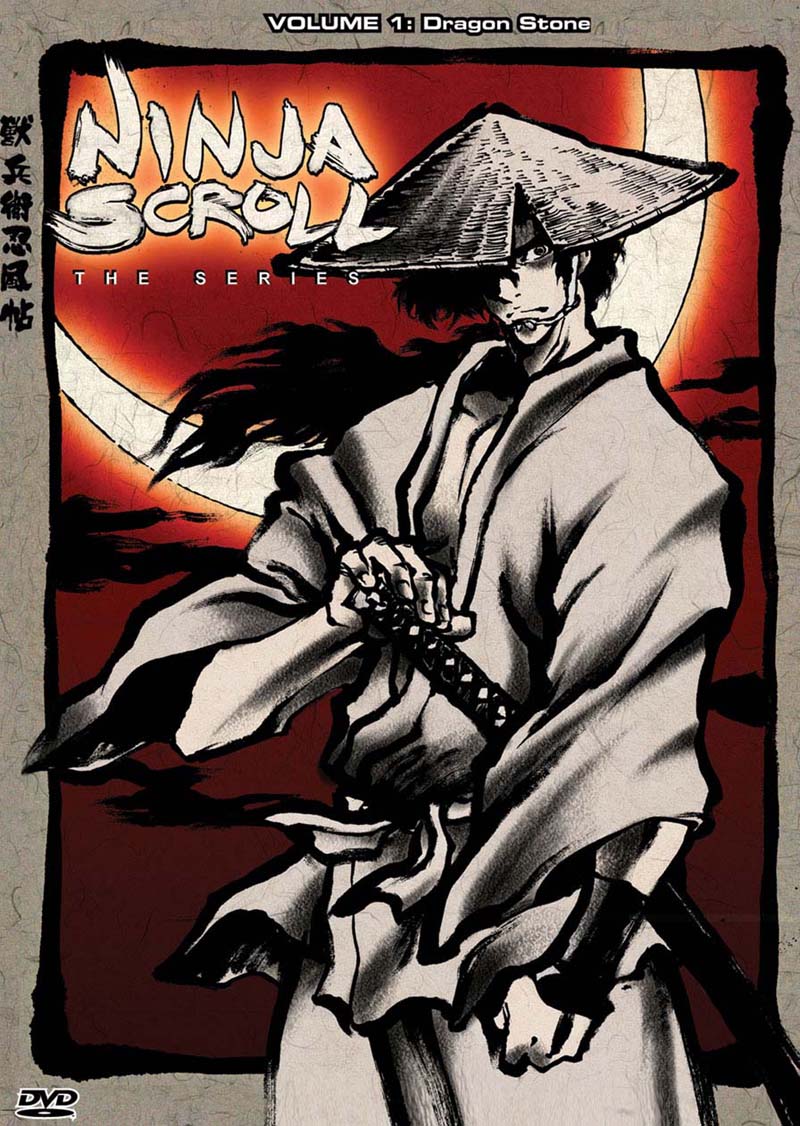 Ninja Scroll: The Series (獣兵衛忍風帖｢龍宝玉篇｣) is a seinen jidaigeki supernatural, martial arts anime series that released in Spring 2003. It was produced by Madhouse, directed by Tatsuo Satō, and written by Toshiki Inoue. The story takes place fourteen years after the original film and follows Jūbē on his wanderings. One evening while trying to rest under a bright moon, he comes across a man in a mask, Rōga, who asks Jūbē to help him with a quest. When Jūbē declines, they go their separate ways. A short while later, the wandering warrior comes across a small village as it’s being attacked by a clan of vicious demons.  While there, he meets Rōga once again, who has been gravely injured in the attack. As he lays dying, his true identity is revealed. Jūbē agrees to grant him his final wish, which is to return the infamous Dragon Stone to the Priestess of Light.

Ninja Scroll was an excellent film. There were so many things that I adored about it. So, when I saw that it spawned a serial ten years later, I became curious. I’ll admit that the reviews for this are decidedly less than enthusiastic. Many avid otakus hated it and felt it didn’t live up to the quality of the original. After watching the first episode, I feel like they may not be too far off in their strong distaste for this thing. But I also know that first episodes can be a far cry in determining the overall quality of a show.

The story seems like a typical fantasy gig. There’s the main hero dude who goes on a quest to return a great power to its rightful owner to help stop the evil peons of doom-and-gloom from seizing said power and shrouding the land in evil shenanigans. There’s even a scene where Jūbē rescues a damsel-in-distress, which is a  total scream of classic fantasy tropes and also a bit of a tossback to the film. In that sense, it isn’t anything special at all. Even so, I really love the fantasy genre and don’t mind age-old common narrative devices such as these, especially if they’re written well. In most cases, I even welcome them because of how much I enjoy them. However, in Ninja Scroll: The Series, I don’t think my adoration for the genre will be strong enough to hold my sincere interest through all thirteen segments due to how laughable the quality of its production is.

What surprised me the most was the animation. The show was produced a decade after the theatrical release of the film, yet it looks and feels like it’s actually ten years older than said film, not younger. The line work and the imbalances in some of the character designs had me cringing during a lot of the scenes. The action and fight scenes flowed nicely, and the splashes of blood and guts was also pretty decent, but when you step away from those portions, it’s quite a bit impossible to tell that the anime was made in the early 2000s.

The musical score is also very 80s-esque and reminded me a bit of Super Dimension Fortress Macross in many respects. It has a distinct post-disco and dance-pop vibe to it that is very akin to Japanese 80s city pop but more cinematic, if that makes sense. It complements the old-school animation style perfectly, and I think it would have worked quite marvellously if this anime were, in fact, produced during that decade.

I have to wonder if all of it is another throwback to the film and the retro age of anime production. It boggles my mind to believe that it could be anything else, more so when I consider that it was made by Madhouse, which is one of my favourite studios. Then again, everyone has to start somewhere and not everything they do can be an absolute work of perfection, especially their earlier works. Nonetheless, I still felt relatively shocked as a I watched the pilot.

The biggest (potential) problem in Ninja Scroll: The Series is the demon clan. Most of them are equipped with or utilise metal-based armour and weapons that (to me) were incredibly out of place within the era that the show takes place in. They are a bit steampunk-esque, which could’ve been cool if it wasn’t too busy being humongously jarring and erroneous with respect to the village, the surroundings and environments, the fighting styles of the characters, the overall time period, and a few other things. I remember physically shaking my head at it and laughing on occasion. Even so, I think it’s going to be hilariously entertaining watching Jūbē slice-and-dice these contraptions with this wicked sword.

Overall, my first impressions of this anime are not the greatest. In fact, aside from Jūbē, there is very little that I could call out as being a pro versus a con as far as watching experiences go. Nevertheless, I’m not quite ready to give up on it yet. Call it naïve optimism or potentially misplaced hope from someone that just really fucking loved the film and isn’t ready to call it quits yet. Whatever the case, at the very least, by its finale, I should be able to write a moderately amusing review for it where I shall either gush with surprise or sob with glorious disappointment, which is something that gives me a lot of pleasure and I look forward to the experience. Even if it is a hot mess of WTF.