Please note: This post shall have references to depression and abuse, and implications of suicidal thoughts. Please read at your own discretion, thank you.

As the weekend comes to an end, while a brand-new month begins, I was reminded yesterday of an anniversary that I had completely forgotten about: my blogging anniversary! So, to celebrate this somewhat unbelievable yet momentous event, I thought I’d share with you the backstory of this blog and how it came to be what it is today.

Five years ago, in 2015, I escaped one of the most devastating chapters of my life. I had been married to a guy and lived together with him and his father for the better part of ten years, where I underwent severe psychological abuse from both of them, and other forms of abuse from my husband. Being a brown-skinned girl* living with two white men with major superiority complexes, I was essentially forced to disown my cultural identity and assimilate into the worst parts of Americanhood. During that time, I also learned a terrible truth about said husband in the midst of our separation, and I was in the darkest most fucked-up place that I have ever been placed in in all my thirty-two years of existing.

I’ve chatted somewhat about these experiences sporadically via some media reviews and Self-Care Sundays posts, so I won’t go into more details here. But suffice to say, I didn’t think I’d make it out of that prison. Every night, while I lived in a non-insulated garage with pincer bugs, spiders, and moths that could give Mothra a run for its money, while sleeping on the hard ground in a torn up sleeping bag, I had prayed to Boss Man to make it all end. My mental health was absolutely shattered with depression eating away at whatever tiny morsels of hope that I had remaining.

In February to March of that year, I had met a someone who would  grow to become, not only my closest friend in the whole damn world, but also one of my favourite humans to have ever existed. We built our friendship slowly, through a lot of random bickering about films and books. Long, late night walks through the neighbourhood where we talked about religion, psychology, supernatural spoopy stuff, and shared our past trauma and other dark experiences, providing a sort of comfort that neither of us realised we needed until those moments.

During the last week of July, they were having some extreme bouts of insomnia. Having dealt with it quite chronically up until that point myself, I asked them if there was anything that I could do to help. They wanted me to read to them. They enjoyed the sound of my voice and found it to be relaxing (of course, I laughed at this because I was always bullied for having a British accent while being brown-skinned). At first, I was super hesitant. I hadn’t been reading at the time. In fact, I probably hadn’t finished a book in a couple years at that point. Even so, eventually I agreed. I’d read them a chapter or so every night, over the phone, until they fell asleep. The book they chose was Frankenstein by Mary Shelley, the original 1818 text. 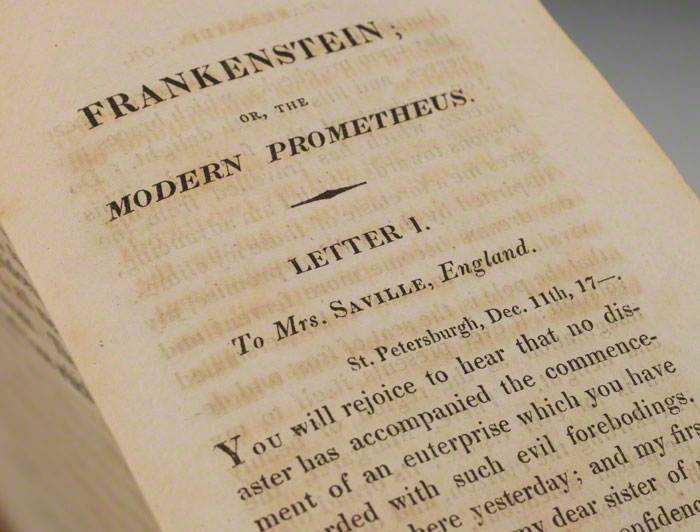 When I finished the book one evening, they were still awake, so we chatted about the themes, motifs, and the brilliant romanticism of the novel—all elements that had made me fall in love with science-fiction a long ass time ago. During this conversation, they had mentioned that I had insightful things to say about it. Since I dreamt of becoming a writer and had at one point wanted to become a teacher of literature, they suggested that I start writing book reviews.

My mind was blown.

I always felt that a person had to go to school and study to become a reviewer. It never occurred to me that the only real thing one needed was a platform and the intention or desire to do it, as well as something to say about the books they’ve read. The notion of me doing this thing that had always interested me but felt way too out of reach was somewhat outrageous. My brain just wouldn’t compute it.

My friend chatted about how YouTube and blogging are the best platforms for reviewing. With my severe lack of self-esteem and no ideal place to record videos, YouTube was way out of the question, and as far as blogging is concerned, I had no idea what the fuck a blog was, let alone how to set one up. Longer story short, through a process of tinkering and experimenting (and tons of pushing and shoving and prodding from them), my friend helped me set up a basic blog, and on August 1st, 2015 I created this space (although my very post didn’t go live until September because I was a super Saiyan craven).

The blog was birthed under the name The Book Brew. Since I loved teas and chai, I figured it would be an excellent title for me. However, the more that I blogged and evolved, the less connected I felt with that name. I’d undergo a couple more blog name changes (Neko Baka Books and The Book Cat) before I’d settle on BiblioNyan.

When I created the name BiblioNyan and completely revamped my blog space, it was about a year later in November to December 2016. I had been living in a brand-new, safe and comforting environment for about a year and felt like it may be time to try and heal in new ways, ways that made sense to me as a severely agoraphobic and highly confused (with regard to future goals) individual.

I loved chatting about books so much (even though I was still quite a newbie at it), and when I had gotten swept up in a movement that centred on promoting and raising awareness for books by marginalised people, particularly People of Colour, my passion for reading sort of blossomed and mutated into this newer and more powerful entity that has been such a humongous source of inspiration and ambition for me ever since. Also during this time, I was looking to expand the content on my blog to include otaku-related material. Now that I was knee-deep in reading shenanigans, I thought it would be really great to re-connect with my love of anime and manga again. All of these things coincidentally (not really) started sprouting up during a period where I was finally learning to heal from my past trauma and abuse. I was ready to experience new things and take one miniature risk at a time so I could figure who the hell I was as a person, albeit very slowly. What were my interests? My opinions on media? My passions or dreams in life that were no longer influenced by the selfishness of my oppressors? Who the bloody hell was Shāfiya Mū (or Neha or Nyan) when they weren’t being beaten down and humiliated anymore?

Eventually, this led to the creation of the name BiblioNyan—a perfect representation of my love of books (Biblio) and my passion for otaku culture and cats (Nyan, the Japanese word for “meow,” which is commonly used in anime and Kawaii Culture). BiblioNyan helped me to answer these questions and has helped me to grow from a lost, pathetic little person that was desperately seeking a way out of their dungeon, into a more confident, self-assured, ambitious, passionate, and unapologetically Indian-iTaukei Queer individual. Through my writings on literature, anime, and self-care, as well as films and video games now, I have discovered what I want to accomplish in life and my desire to pursue these aspirations without doubt or hesitancy has become an incredible source of support for me.

Celebrating my blogging anniversary is like celebrating the birth of who I am now. It’s not just about eating cake (or in my case brownies because that’s what I ate yesterday) and tossing confetti. Celebrating this milestone is acknowledging and respecting my past for what it was and what it taught me. For the wisdom it gave me so that I can help others who are in similar situations. For the way it has humbled me with all that I have achieved since then (I’ll never forget how precious all of this is and what it’s like to not have any of it). It gave me my dreams back and it reinvigorated me with strength of ambition, self-respect, and self-love. Also, it introduced me to such a large community of kind-hearted and compassionate people that help me not want to be alone or be afraid to reach out and make friends again. It shows me that there are great people out there, people who are as awkward as I am and maybe not the best conversationalists because of our shared anxiety and awkwardness, but folx with gigantically warm-hearts nonetheless that are trying their best, just like I once did and continue to do to this day, and shall always do in the future.

So, this celebration is just as much for you all as it is for that broken girl*, and it’s also for that one person who never, ever gave up on me. Even when I gave up on myself. Madame Gabs, this one is for you. Happy 5th Blogaversary. 🤎🤎🤎

Please note: The term girl is used here in reference to who I was because that was a big part of my identity back then. I was completely oppressed from embracing myself as a Queer Nonbinary as the environment I was in was steeped in phobias against the LGBTQIA+ community. It’s an essential part of my past, even though it’s an inaccurate representation of my identity.