Typewriter is a 2019 Indian (Hindi language) mystery, supernatural drama on Netflix about an old house in the small town of Bardez called Bardez Villa that is the centre of some local ghost stories after an elderly author died there. Many years later, his granddaughter, Jenny, and her family move back into this manor that has been utterly abandoned since her childhood and that tragic evening. Upon their arrival, some sinister shenanigans start taking place, threatening the lives and peace of the town of Bardez. Three young kids (and their dog) who are fairly infatuated with solving mysteries decide that they are going to solve the enigma behind Bardez Villa’s past (and present) and save the town from doom-and-gloom.

In my First Impressions, I basically gushed about this series. It had so many amazing dynamics to it that filled me with a great sense of glee, some of which include: a super sweet charming father-daughter relationship, an excellently balanced mixture of suspense and mystery, nice music, and a limited amount of episodes making it ideal for weekend binging. After having finished the series, I still stand by all those elements, but have added a couple of minor disappointing quirks to the list as well.

I love the family values in Typewriter, specifically the bond that is shared between Sameera and her father. Sameera is one of the main characters and part of the mystery-solving delinquent trio, and her father is a police officer. They have such an honest and sincere connection between them, filled with so much warmth and positivity that’s impossible not to adore them with all of one’s heart. This is the sort of father-daughter representation that South Asian cinema desperately needs more of. In many ways, they reminded me of Eleven and Hopper. The endearing way they bicker. The unspoken pain that they share over the loss of Sameera’s mother and how it’s impacted them both in separate ways. The fact that Father-ji has taught his daughter to be brave and strong, yet also worries so damn much about keeping her safe and raising her right. It’s all so beautiful and at-times pretty hilarious. I only wish that Jenny’s family had the same sort of vibe to them. 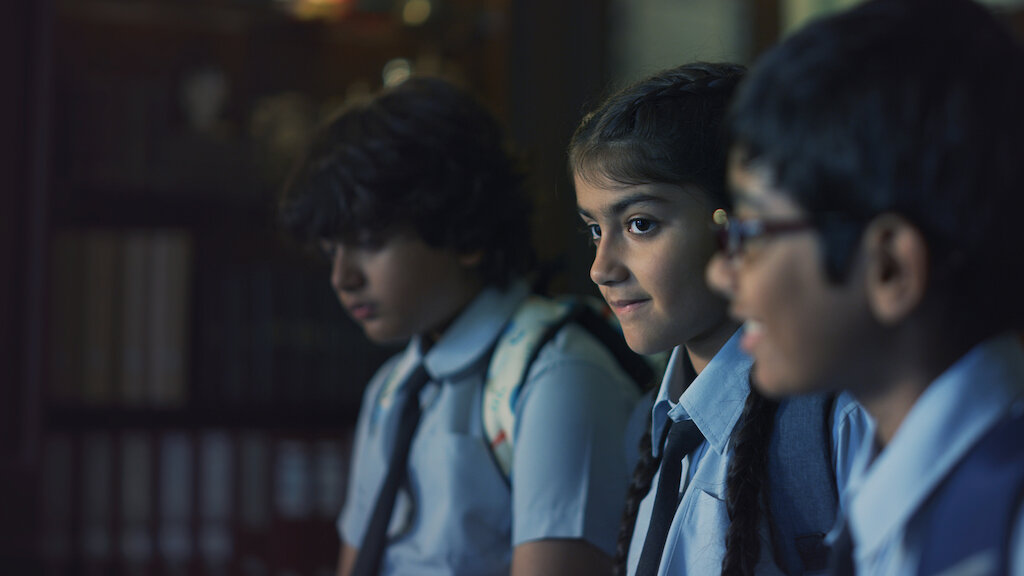 She’s clearly got a plan brewing

We see her entire family when they move into the manor in the first episode. After that, we see her son rather regularly as he formulates a good friendship with Sameera and her chums, but we see so little of Jenny’s daughter and husband. Her daughter is going through this rebellious phase that is very lightly touched upon but never expanded, and her husband has some of his own personal drama that seems to be interspersed in between parts of the overall story. There were many times throughout my watching where I pondered as to why Jenny was written to have a whole family. She could have been written as a single mother and the story would have felt much more cohesive and smoother in its progression. Her husband and daughter just felt like filler bodies.

My issues with her husband went a little beyond that as well because of the drama that he’s embroiled in. It doesn’t contribute to the narrative at all and came off as something extra that was included to force depth into the character. There is one scene in all five episodes where it may connect to the main, centred tale, but even then, it’s such a reach that when it happened, I simultaneously laughed and face palmed.

He looks unsure about his place in this show too

The spoopy elements in Typewriter surprised me! I had expected there to be a dramatic increase in jump scares post-first segment, but they stayed limited in their quantities, which I welcomed. So much of the show is built upon atmosphere. The narrative unfolds slowly with lots of dialogue as we learn the history of the town and this villa, and some really interesting titbits with regard to the residents. It felt quite thinky but in a fun way. This is further complemented by the nonlinear storytelling (unlabelled flashbacks) and the music, which fluctuates between whimsical and tenuously malevolent depending on the scene, and all of it transitions smoothly. There also isn’t a lot of music either, which I appreciated because then it doesn’t disrupt the ambiance that plays into the atmosphere-building.

The ending for Typewriter was satisfying to a degree. It wasn’t a comfortable, bowtie ending. There’s a spot of ambiguity to it that hints at a potential sequel, yet there hasn’t been an announcement for a second season (or a cancellation) yet, so I have no idea if those hints shall ever get a chance to be flushed out. This is my biggest issue with Netflix Originals. Almost all of them end on some sort of cliff-hanger, so if a title is cancelled, there is no satisfaction to be had, just loads of frustration. (Wu Assassins and Messiah immediately come to mind).

Beyond the minor quirks, I actually really enjoyed Typewriter. As I mentioned, it’s got some marvellously endearing traits and the spookiness was rather pleasant overall. Even with the things that I didn’t care for, the series is definitely worth watching, especially with being only five episodes long (an hour apiece). I will say that there are a few mildly graphic deaths and the English subtitles do translate certain phrases more vulgarly than they are in actuality or context (not really incorrect, just extreme interpretations sometimes), so keep that in mind if you decide to watch this with youngens. All in all, I recommend it for sure!

Typewriter can be streamed exclusively on Netflix.