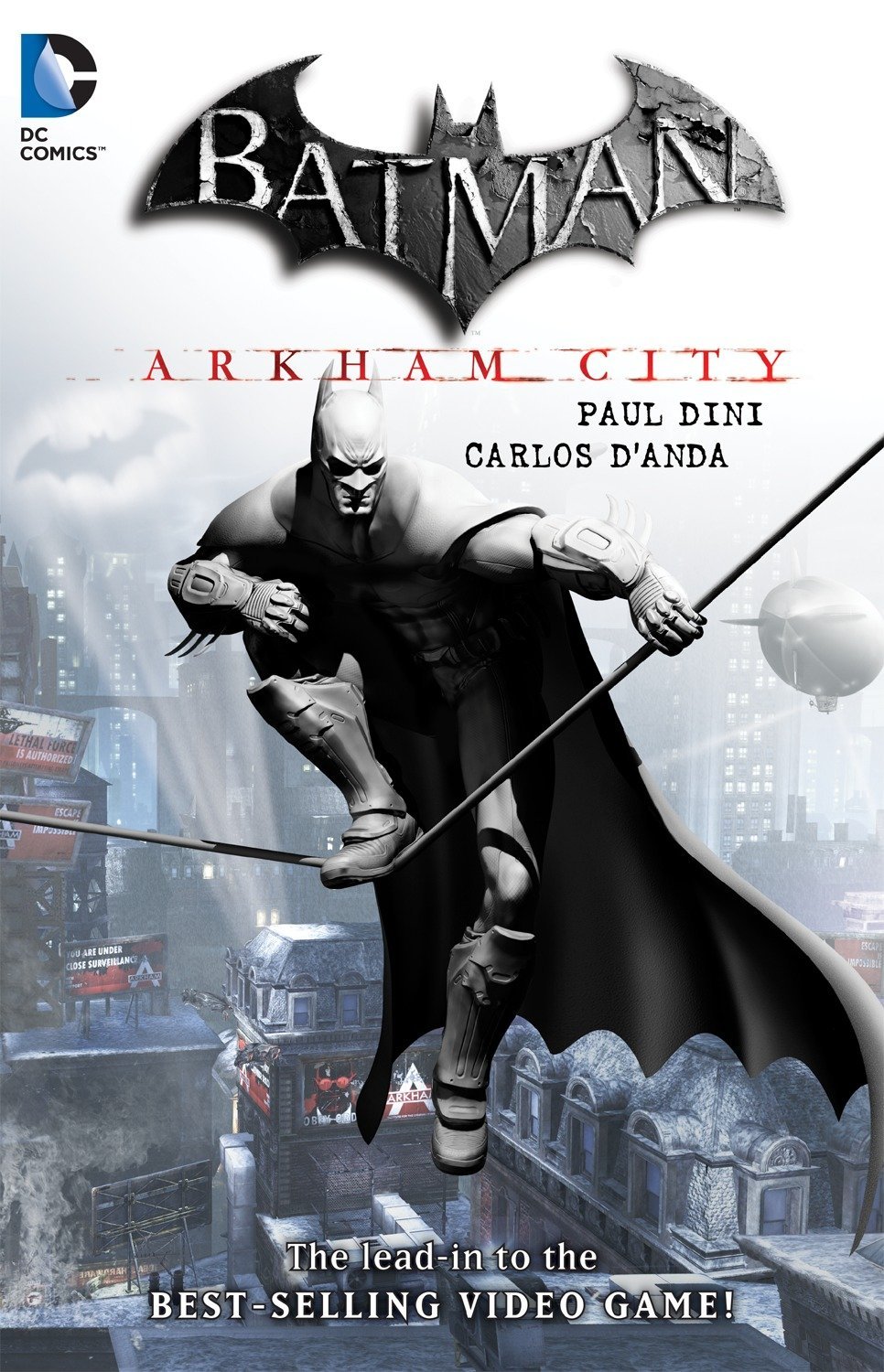 Batman: Arkham City by Paul Dini and Carlos D’Anda is the trade paperback collection of the five-issue miniseries that bridges the gap between the events of the video games Batman: Arkham Asylum and Batman: Arkham City. It was published approximately one year after the sequel game’s release via DC Comics.

Recently, I completed a second playthrough of the video game, so I thought it would be neat to read it’s comic counterpart. While I loved the artwork and the fluid portrayal of the events that led to the establishment of the super prison known as Arkham City, there were a few things about the miniseries I wish were done a bit differently.

These five issues take the backstory surrounding the chaos that ensued post-Joker’s attempt at taking over the infamous mental institution, Arkham Asylum. We follow the insidiousness of Quincy Sharp’s use of the event to better his own visage with the media and citizens of Gotham to obtain power. It’s a half-arsed attempt at covering his mistakes, but unfortunately, it has the desired effect. These events that follow suit are displayed in a fairly straightforward manner in this adaptation. Everything that is depicted are elements that are revealed in the Arkham City video game via main and side story quests, as well as through a few unlockables that are obtained from finding the various collectibles scattered all over the city.

We get introduced to Quincy Sharp’s most influential backer, Professor Hugo Strange, and how ultimately he is the big boss baddy that leads to the establishment and rigorousness that become the super prison. Seeing Strange being shown as a mad scientist of sorts was a lot of fun and nostalgic for the freshly finished gaming experience that I had. My only real complaint is that the true scope of Strange’s brilliance isn’t captured in the graphic novel. He’s far more generic and unimpressive, which made me sad and mildly frustrated because the guy is a psychological genius. Yes, he’s mad in the traditional, psychopathic scope of the word, yet he’s also incredibly logical in his musings; things that all lead him down the road to discovering Batman’s true identity.

Another facet that I thought was rather cool is the artwork. It’s wonderfully dark and gritty with crisp, clear drawings, rich colours, and awesome vivid sound effects bubbles and texts that are reminiscent of old-timey Detective Comics originals, while being modern and beautifully cinematic. It makes me wholeheartedly wish for an animated adaptation because I feel it would work remarkably well, more so if it’s created by the folx behind Under the Red Hood film (a favourite of mine).

An extra bit of awesomeness for the digital editions of Arkham City exclusively are the addition of four or five short stories at the end of the main narrative, each one centring on a specific character (such as Bane or The Riddler). It gave us some insight into what occurred with them in between the first two Arkham titles and how they ended up where they did when Batman encounters them in the Arkham City video game. These were also stories that are ripped straight form the game as they are unlocked by completely specific side quests.

As for the aspects that I didn’t really enjoy, there’s really just one big one: it shouldn’t have been about Quincy Sharp and Hugo Strange. Don’t get me wrong, I greatly appreciate this rendition of prequel events, however, reading it is such a regurgitation of stuff we learn in the video game (particularly if one unlocks everything regarding it). It doesn’t offer anything new or fresh (not including the extra short stories), and it felt like a big missed opportunity overall. Let me explain.

There is one part of the game that really intrigued me and it’s when we discover that Hugo Strange had a partnership with Rā’s al Ghul. He is another one of my favourite characters to dissect because there is so much there to look at and contemplate. While the basic foundation of their relationship is revealed, the details behind it are vague and ambiguous. What would truly make Rā’s want to become an ally or partner with Strange? Who approached whom? Did Strange have to complete any sort of trials? All these questions linger around in my mind and I would love a fucking comic-based exposition on this whole thing. It would definitely be far more interesting to read about then the rise of Huge Strange as the warden of Arkham City, which is such common knowledge already. Also, mind you, Rā’s al Ghul is just one example of a potential prequel story that would have worked much better than what was given.

A second example would be how Penguin locked up Solomon Grundy. That was such a fun, “Oh, what the holy fuck” moment in the game and one of my favourite surprises. Solomon Grundy is a terrifying dude and while there are ways to pacify him, reading about it would have much more enjoyable. Granted this is more a side story gig than a main story one, but it’s still a pretty fascinating one to me.

All in all, this prequel to Arkham City is not a bad one by far, and I do recommend it to fans of the video game looking for more of a smidgen of information on the backstory or even just for a trip through nostalgia neighbourhood. The extra stories are great and insightful. The use of Batman’s interrogation quotes from the game was a nice touch as well. There are even a couple cameos from favourite old allies. I merely wish that it weren’t such a repetitive presentation; that it took a unique and unexpected focus rather than this simple and already familiarised tale.