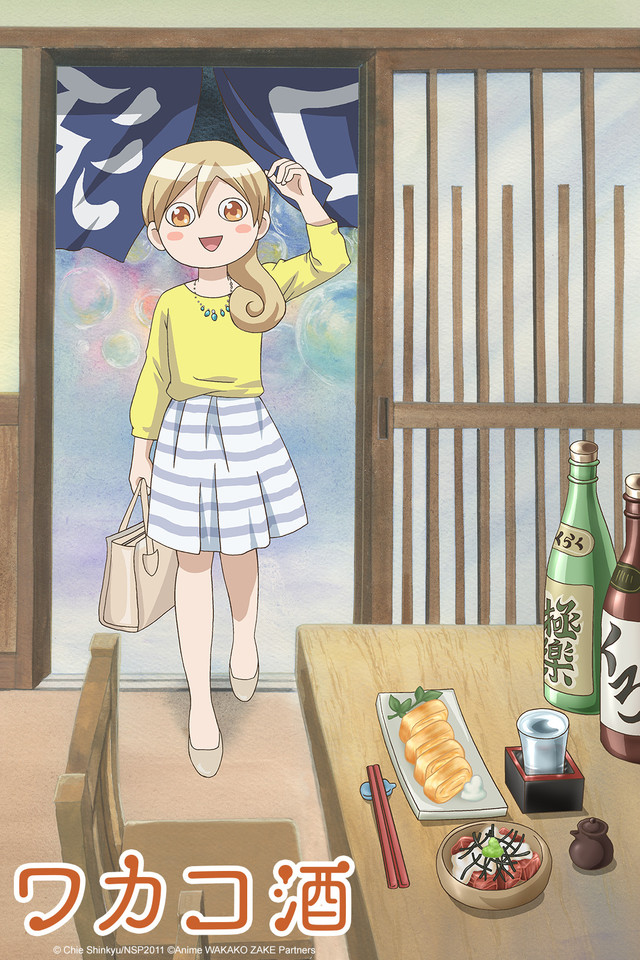 Wakakozake (ワカコ酒) is a seinen, cooking short anime that released during the Fall 2015 simulcast season. This adaptation of the original four-panel manga was produced by Office DCI with direction from Minoru Yamaoka.  It follows a lady named Wakako Murasaki, who is a 26-year old office worker. After a typically humdrum and usually exhausting workday, she likes to explore various restaurants, pubs, and eateries where she indulges in yummy Japanese food coupled with a refreshing alcoholic beverage.

In one of my cultural Japanese classes from the previous semester, we studied an up and rising custom in Japan known as “ohitorisama,” (お一人様) which literally translates to “on your own.” It’s a modern cultural practise of partaking in solo activities, such as dining out, doing karaoke, and more. One of the pop culture media that we watched to help us better understand this custom was the Japanese drama adaptation of this series, Wakako-zake. As someone who is quite introverted and has recently re-discovered their passion for doing things by themself, I became rather intrigued by this show and wanted to learn more about ohitorisama. So, I hunted down the manga and anime, and then did some minor research outside of the classroom for my own interests.

What used to be a phrase that was coined to describe men who had no desire for getting married or involved in super serious relationships, has since then evolved into a movement where people are learning to embrace the comforts and pleasures of their own company. By going out and eating alone, for example, there’s no pressure of having to make conversations or being judged for ordering certain food items, or even for choosing to enjoy the simple act of drinking alcohol or subjecting oneself to various other peer pressures that arise with social activity-based interactions. In a Western society where such a hefty amount of self-perception revolves around being well-liked and loved by many people, or by being a force of nature in a large social gatherings (ideals that are exasperated by the toxicity of popularity contests in social media systems), the sheer concept of ignoring all of that and returning to an uncomplicated era of merely enjoying things again on a personal level sounds positively brilliant.

There is so much judgement that surrounds individual interests. For example, if someone is seen reading alone at a café, it’s uncommon for the general public to view them as a person that is having fun. Instead, there is this assumption that they are alone because they are anti-social or that they don’t have any friends. These sorts of hurtful thoughts almost instantly come up when faced with folx doing solo things. I never understood that, even when people would insult me with similar mutterings to my face whenever I went out and did something solitarily. When I would question them about those opinions, no one ever had a legitimate response. Their subjective commentary was an auto-pilot mental process because of how being alone is portrayed in society, especially if someone is a woman or feminine-passing.

The beauty of Wakakozake, is that the woman is a full-grown working adult that breathes life back into the act of enjoying one’s own company, as mentioned earlier. At its core, this practise is a lovely example of the essence self-care.

Self-care is learning to love and take care of oneself, which means learning to work through insecurities and embracing all the parts of oneself to feel content and comforted in day-to-day living, even when life becomes dreadfully difficult or fucked-up (this is one part of self-care, but a key and major element nonetheless). Wakako partakes in self-care whenever she has a tough day.

She treats herself to a delicious meal with an energizing drink and it allows her to relax and focus on moving past her arduous hours of professionalism. Her independence is a tiny bit taboo (because she’s a woman) yet also marvellously endearing and charming because of the same reason. The fact that she also loves alcohol in a recreational and positive manner is something that I adored about the series. Not everyone who drinks does so because they are depressed or down. Some folx just like the taste of it and the many innovative ways alcohol is used to create/complement an array of flavour profiles. It’s no different than wine enthusiasts, or sommeliers (if someone wishes to do this more professionally) who seek to find the best wines for specific dishes, meats, desserts, etc.

Aside from the pleasant spotlighting of the practise of ohitorisama, the food in Wakakozake is outrageously mouth-watering. With almost every single segment, I was left starving and aching to try the dishes that Wakako had just consumed. There were even a few times when in lieu of the food, I just wanted to taste the beverages she was sipping. For example, one evening she had hot sake, which I love to bits but haven’t had in ages. Anime food is my weakness and is one of the many reasons that I love this medium. Meals and ingredients to said meals just look so magical and remarkably appealing in anime form, to the point where it has taught me to be more adventurous in my own foodie experimentations in real life.

If there’s anything about the series that may be frustrating to some watchers, it’s the fact that it’s so damn short. Each episode is about two minutes, of which thirty seconds is devoted to an opening song. The last fifteen or so seconds usually highlights a local restaurant in Japan, which I think was a neat little addition. Nevertheless, the limited screen-time allows for an almost non-existent discussion of ohitorisama. It’s more of an implied thing, like it’s expected that the audience already understands what it is going into the anime. Honestly, the anime felt like it was made to be a cute addendum to the franchise for folx who had already seen the drama or read the manga ahead of time. Since I did watch the drama prior to the anime, I feel that my pleasure from it was cushioned by my prior knowledge. So, that is something to keep in mind for sure.

Also, Wakako’s character design is so damn difficult to take seriously. She’s drawn in an almost chibi-style with a large and comically cartoonish head. The rest of the characters that she engages with or that fill out the backgrounds aren’t drawn to be as absurd as she is, so it threw me off on occasion. More so when she makes an adorable, happy expression upon a satisfying bite that is followed by the even cuter phrase, “Pshuuu.”

All in all, Wakakozake is a super charming show that can be seen in half an hour or so. I would recommend it to people who have either seen the drama, read the manga, or are already somewhat familiar with ohitorisama and would like to watch a delightful, effortless series that exemplifies the beauty of self-love via learning to find joy in one’s own company with good eats and great drinks.

You can watch Wakakozake on CrunchyRoll (anime and drama).